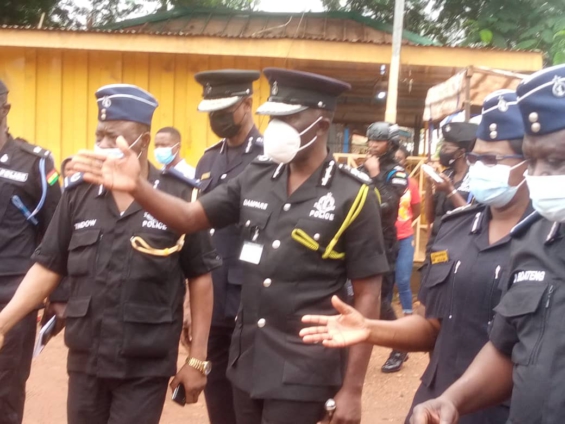 Acting Director General of Police Public Affairs ACP Kwesi Ofori says apart from tactical processes being deployed to legally nail Madina Member of Parliament Francis Xavier Kojo Sosu but unsuccessful, the police will be heading to the Supreme Court to seek constitutional interpretation of provisions on immunity of MPs pertaining to their arrest to cater for the future.

African Editors’ sources have confirmed that there was attempted arrest of Member of Parliament for Madina Lawyer Francis Xavier Kojo Sosu by alleged National Security Operatives today but was resisted by church members and the youth led by Minority Chief Whip Muntaka Mubarak who jumped to his defense during Sunday service.

According to the Spokesperson of the Madina MP, the supposed National Security Operatives entered the church premises solely to pick the Human Rights Lawyer Sosu but were discovered by some church members who raised alarm over the unfortunate development leading to dramatic scenes at the church premises.

The church members and youth after questioning the purported national security operatives and realising that their mission was to arrest Lawyer Xavier Sosu, jumped to the defence of the MP, resulting in a near conflict during which they succeeded in resisting the arrest upon arrival of Muntaka Mubarak who immediately whisked Sosu into his car and drove him away from the scene.

Spokesperson of the MP who broke the news to African Editors on Sunday 31 October 2021, 1pm in Accra, said “although they have not yet reported the matter to the police for appropriate action, his outfit is almost sure that the constituents and the youth who have thrown their weight behind their MP for a good cause, are enough to provide some a amount of security for the MP”.

It’s the second time the Madina Lawmaker Xavier Sosu was confronted with attempted arrest during his recent demonstration together with his constituents over deplorable roads.

Sosu has since reported the matter in the floor of Parliament during which the police officers involved have been referred to the Privileges Committee of Parliament by the Speaker Rt. Hon. Alban S.K Bagbin.

The Ghana Police Service has upon the referal of the police officers to the Privileges Committee, written to Speaker of Parliament to release Xavier Sosu for questioning.

But, the Speaker has replied them that his office is unable to give green lights for the arrest of the Madina MP because the matter is before the Privileges Committee of Parliament for probe.

African Editors is monitoring the development and readers are assured of updates as the event unfolds before our eyes.