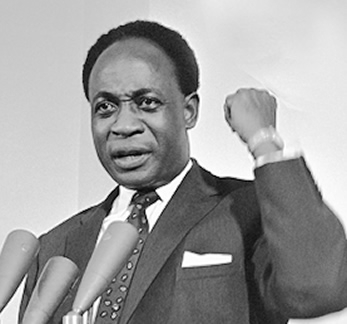 February 24, 1966, exactly 56 years ago, Kwame Nkrumah was overthrown. In the next few pages, I confess my part in the overthrow. Not with a gun, not with a ballot paper, but simply by osmosis.I was indeed a timid, diminutive creature in Form Three at Winneba Secondary School, a great school in a great town, dotted by flashpoints of Nkrumaism. The School’s Headmaster was B.K. Oklu, a Peki born disciplinarian, whose personal traits alone set standards for policy and order.

He belonged to the paradigm of well-behaved educationists whose hair sculpture was autobiography in itself. The style was called the ‘aboy’, a scissor-constructed vertical line above the forehead that betrayed a Presbyterian genesis. To top this was his outward curving moustache that was so deep it must have been pre-wired from bi. Oklu’s black Opel saloon car was discipline on wheels; its registration number AN 2463 was a security camera. Should you run away to Winneba town without exeat, and you saw that car, or rather that car saw you, you’d better take to your heels.

If Oklu had a middle name it was ‘Discipline,’ which he stamped on the entire school. Order reigned throughout our days except for two occasions when we were somehow allowed by law to misbehave. One was the day of Nkrumah’s overthrow. Winneba also happened to have been historically immersed in Ghana’s political history. Educational institutions though non-political had a political aroma. Winnesec was one of the earliest of Nkrumah’s GET (Ghana Education Trust) Schools, founded in 1949.

The names Dowuona Hammond, Alex Quaison Sackey, Kojo Addison all associated with Winneba were pillars of mentorship and sources of pride; and the School acknowledged this. Dowuona Hammond was the first Principal of Winnesec, and was later persuaded by Nkrumah to be a member of the Gold Coast Legislative assembly representing Winneba; he also became Kwame Nkrumah’s Minister for Education. For that reason, a dorm at Winnesec was named ‘Dowuona Hammond House.’

There is also an Agyare House, named after Kofi Agyare a son of Winneba who was propaganda secretary for CPP in the Winneba constituency. The Ayirebi Acquah House represented a royal dynasty in Winneba. But the greatest house or dorm had to be Kwame Nkrumah House, where I was ensconced, named after Osagyefo himself. Kojo Addison was the celebrated Director of Kwame Nkrumah Ideological Institute in Winneba, founded to teach socialism and neo-colonialism. One of its past students was Robert Mugabe. In Winneba, Kwame Nkrumah topped all this with a Workers or Builders Brigade, located at the seashore, currently the police training depot in Winneba.

February 24, 1966. The quiet and sober town of Winneba was thrown in turmoil when a coup d’etat was announced. Memorable IncidentAnd what did it all mean to us? That was the first time we heard the expression, coup d’etat; announced through the re-diffusion radio boxes around campus. There was only one radio station, reaching the various communities through re-diffusion boxes, installed in various dormitories; and that was it. Televisions? There was only one such in the entire school: a 20-inch black and white TV installed in the assembly hall.

Even though unsure what was really meant by a coup d’etat, it implied the overthrow of Kwame Nkrumah, the fearsome Messiah, whom you critiqued only in whispers. This was an hour of liberation. We threw ourselves into the streets of Winneba joining throngs of merrymakers. The main target of the chanting throng was the famous Kwame Nkrumah Ideological Institute, now the premises of the south campus of the University of Education Winneba. That was the assembly grounds everybody was headed.

In a matter of minutes, Nkrumah’s imposing statue at the Institute came tumbling, the work of a bulldozer brought over from the Builders Brigade. The monstrous bust fallen and pulverised, it was our turn to stamp our feet, ridicule and sneer at the remains of Africa’s celebrated Osagyefo, whose immortality had been instantly negated..But Winnesec students did something else. The Ideological Institute also had a huge pig farm, which was situated on the Winneba plains about two kilometres and a half between Winnesec and Kwame Nkrumah Ideological Institute, in the southwestern direction from Winnesec.

In response to the toppling of the Nkrumah regime, it was the turn of Winnesec students to troop massively to the pig farm and liberate all the pigs. If Ghana had been liberated by the gallant men of the Armed Forces, and a Governing Council formed called the National Liberation Council, why not a liberation of the pigs, who had been permanently incarcerated by a dictatorship? The event led to the liberation and freedom of over 500 pigs, that joyously snorted in relief and escaped in various directions across the Winneba plains. The ring leader in that liberation act was well known among us, Willie (nicknamed Foofo) of blessed memory a celebrated sixth form student who had joined Winneba from Accra Academy, and who eventually became one of the greatest lawyers I knew.

Years later when he and I met at the University of Ghana and I reminded him of the incident, Foofo admitted his folly, and expressed his regret attributing the adventure to innocent minds, and what mob action meant in student life. Immediately after the coup that toppled Kwame Nkrumah, Winnesec changed the name ‘Nkrumah House’ to Aggrey House, after that famous educationist and nationalist. Years later in the 1990s when the nation regained consciousness, the name Nkrumah House was restored. Days after the overthrow was also this funny cartoon in Kofi Badu’s ‘Evening News’ paper: the caricature of Kojo Addison, the celebrated Director of Kwame Nkrumah Ideological Institute running for his dear life, with the caption: Kojo Addison, Running Ideologically…..Here then has been the confession of a lifetime: my role in the overthrow of Kwame Nkrumah.