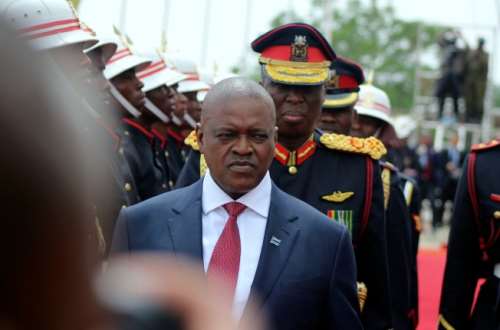 “Authorities of Botswana should retract or reform a bill that could help police and other investigators intercept journalists’ communications without oversight”, the Committee to Protect Journalists said on Monday.

Mokgweetsi Masisi-led government has proposed a bill that could allow warrantless surveillance of journalists, a potential censorship document that will stifle free speech and threaten media freedom in Botswana.

President Mokgweetsi Masisi inspects a guard of honour at a ceremony in Gaborone, Botswana, on November 1, 2019.

The Criminal Procedure and Evidence (Controlled Investigation) Bill was published in the government gazette on January 12, according to a press release by local media groups condemning the bill and media reports. Spencer Mogapi, a newspaper Editor and Chair of the Botswana Editors Forum, which collaborated on the press release, told CPJ by phone on Friday, January 28, that the bill could be expedited through parliament and signed into law by President Mokgweetsi Masisi this week. CPJ reviewed a copy of the bill shared by Tefo Phatshwane, the director of the Botswana chapter of the Media Institute of Southern Africa (MISA).

The bill if passed into law would grant investigators the power to intercept communications without a warrant for up to 14 days if authorized by the head of an investigatory authority to probe offenses or prevent them from being committed, according to CPJ’s review of the bill. CPJ has documented the arrest and prosecution of journalists in Botswana, and local police’s use of digital forensics tools in 2019 and 2020 to extract thousands of files from journalists’ devices, including communications and contacts, in efforts to identify sources of their reporting.

Companies that facilitate communication could see their directors imprisoned for up to 10 years if they fail to install hardware or software to enable interception; anyone that does not provide decryption keys so authorities can access encrypted information could be jailed for up to six years.

Jovial Rantao, Chairperson of Regional press association The African Editors Forum (TAEF), described the bill in a statement as the “worst piece of legislation to have emerged in Botswana, the Southern African region and the rest of the continent in recent history.” The Southern Africa Editors’ Forum expressed similar alarm over the bill.

Reached by phone and messaging app on Friday, Batlhalefi Leagajang, Masisi’s Press Secretary, told CPJ the bill was “not under the ambit of the presidency” and the president would allow the parliamentary process to proceed before acting.

Botswana Government’s Spokesperson John-Thomas Dipowe acknowledged CPJ’s emailed questions about the bill on Friday, January 28, but did not respond before publication.

According to social media posts related to the bill on January 27, Botswana’s minister of defence, justice and security, Kagiso Thomas Mmusi, said there was a need to have a law that could plug legal and security gaps relating to issues of money laundering and financing of terrorism.

The African Editors Forum has been on the forefront of calling on President Masisi
to immediately withdraw the bill to protect press freedom because it undermines the democratic principles upon which Botswana rests.