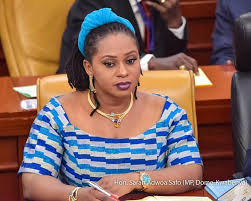 Pollster Ben Ephson has called on President Akufo-Addo, the rank and file of the NPP to show Gender, Children and Social Protection Minister Sarah Adwoa Safo.

According to him, it is important the party leadership and the government take a conclusive decision on the Dome-Kwabenya MP because her continuous absence from Parliament House poses a threat to government business.

Managing Editor of the Daily Dispatch newspaper, told Joy FM on Thursday, February 10, that, Adwoa Safo’s attitude should not be entertained and it will be appropriate for her to be replaced by the party and the government.

“Clearly if the records there at Parliament show that she has absented herself without permission or health reasons, I think somebody should trigger that and the party should sack her for a by-election to be held. It’s going to be very difficult for her to win as an independent candidate, unlike the situation in the Ashanti region. She won the NPP primaries by eight; single eight votes. Not eighty, eight votes.

There’s no way she’s going to win that seat as an independent candidate. That’s a relatively safe NPP seat, and she won the party’s primaries by eight votes, against Mike Oquaye Jnr,” Ephson stated.

He added, “Well, I think I’m sure she brought proof of some medical condition. But I think that she crossed the line of political decency and comradeship.

“I think the President should sack her and if she has not fulfilled the rules for being absent for these number of days, they should sack her; have a by-election and she can contest as independent and she comes to Parliament and perhaps vote for NDC. So, they should call her bluff and sack her from Parliament. She’s shown disrespect to the party that brought her to power.”

Ben Ephson’s comment follows an earlier comment made by New Juaben South MP, Michael Okyere Baafi, where he accused his colleague, the Gender, Children and Social Protection Minister of sabotaging the government.

“All the problems the government is facing are attributable to Adwoa Safo. Clearly, her intention and posture show that she wants to sabotage NPP,” he said in an interview on Kumasi-based Hello FM on Thursday.

“She said she will not come to Parliament if she is not given the Deputy Majority Leader position. All 136 NPP MPs are always in Parliament except for Adwoa Safo. One person cannot hold the party to ransom,” he added.

It is important to anchor that the governing party with 137 seat plus one independent needs the former Deputy Majority Leader to pass the controversial E-levy Bill.