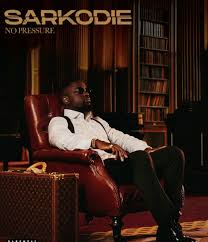 Following the release of the album on Friday 30 July 2021, the ” M3gye wo girl” hitmaker’s album has received a positive reaction on social media .

This new album brings Sarkodie to his 9th album. King Sark in the past decade has the following albums to his credit with Rapperholic being his first album, followed by Sarkology, Mary, Sarkodie Vol.2, Highest, Sarkodie Vol 3, Alpha, Black Love, and  No Pressure.

His album features artists from Ghana, Nigeria and America.