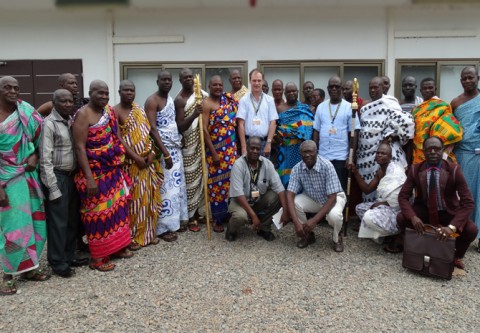 TO: ALL MEDIA HOUSES

The centre of God’s creation has always been humans, and without them, I doubt whether God’s purpose for creation would have been met in perfection. It is why both the Bible and Quran place high premium on human lives. Further, nations across the globe have declared edicts forbidding intentional killings of humans, with few exceptions, in any form or shape.

Expectedly, the protection of human lives is guaranteed and no man has the right to take another man’s life, even with the fairest of justifications or excuses. However, the dastardly act of men killing their fellow men motivated by whatever reason is seemingly unabated and has been with us since creation.

In the 1980’s, Sefwi enclaves gained the notoriety for human killings or sacrifices, making the area a lion’s den to live. Indeed, one always dreaded to live in Sefwi and its environs for either business or tourism. This ubiquitous fear existed among everyone in Ghana, and those who suffered the most were Sefwi folks. A phenomenon that made the natives of Sefwi enclaves gained all the negative connotations, as they were constantly tagged and perceived as evil people.

Whichever way one examines this ill situation, it becomes overly difficult to disassociate some Sefwi folks whilst accusing others of this heinous acts. For as the saying goes “one bad nut spoils the whole soup”. The innocent people of Sefwi towns and villages have suffered quite too long with this negative stigmatization that characterized both genuine and hard-working businessmen and ordinarily folks from the area, which triggered their business as well as oliticalp fortunes to dwindle quite exponentially.

Unfortunately, these human killings, during
those periods, have survived any kind of good deeds the people of Sefwi are noted for. For over a decade, the darkened image of the area has somewhat brightened and slipped through the womb of time. This milestone was not a fluke but owing to stringent measures and commitments by the security forces and the efforts of Nananom, and as a result, Sefwi enclaves have enjoyed peace and reassurance that these heinous crimes of human killings have bidden cheerio to the people of Sefwi and its environs.

At least, Ghanaians, during these times, have grown in confidence and assurance that, this rancid ill notoriety that the people of Sefwi enclaves were once associated with has been diffused utterly. This, I must say, as a traditional leader is overly refreshing and welcoming.

Bizarrely, just as when the people of Sefwi environs seem to perpetually celebrate this feat in hope that, the ghosts of these heinous human killings have been mutilated and buried, we woke up to the news, few days ago, that a woman has been beheaded in Sefwi Bekwai Traditional Area.

I have been devastated by this ill development as the traditional ruler of my area, and hereby extend my condolences to the bereaved family of the deceased. I therefore condemn this act and unequivocally state that, under no circumstance should any human being lose his or her life in such a circumstance. I am passionately appealing to the security agencies to do the best thereof, in order to bring the perpetrators of this heinous crime to book in earnest.

As one of the Traditional leaders in the Sefwi area, I warn all and sundry engaged in such inhumane and dastardly acts to desist from engaging in same, as it has been the tendency of sinking the already wobbly image of the people of Sefwi enclaves further in abyss. Let me put on record, rather forcefully that such dastardly acts shall not be countenanced in the Sefwi areas any more. Together with my colleagues, the paramount Chiefs, divisional chiefs, odikros, linguists elders and the youth in the Sefwi Traditional areas, and with the help of the security forces, we shall fish out the few bad nuts in our midst wanting to sink the image of the folks of Sefwi enclaves, and the laws of our land shall deal with them accordingly.

I want to assure the general public that we shall do everything that is humanly possible, to avert such negative and ugly occurrences in the future. Our traditional areas cannot be revisited with such horrendous crimes again. Enough of the ills we have had regarding these human killings in the past.
Indeed, human lives are invaluable and priceless and nothing can be equated to same, for which reason we shall form a unified front to fight this canker. No one should die under such circumstances again in Sefwi areas or any part of Ghana and the world as a whole.