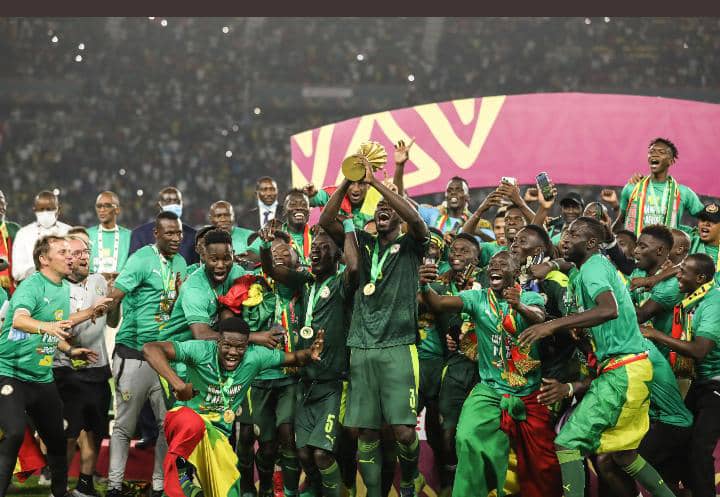 The Teranga Lions of Senegal has been crowned Champions of African Cup of Nations after beating the Pharaohs of Egypt 4-2 in penalty shoot out after 120minutes without a goal.

The much anticipated final kicked off with Senagal looking more dangerous and asking all the right questions, but Egypt goalkeeper Abougabal exploits denied Senagal including a penalty save from Sedio Mane.

The Pharaohs didn’t see much of the ball until the last minute into the first when Mohamed Salah weaved his way through the Senegalese defense but his was too weak to score Mendy, which was their first shoot on target.

Egypt got the second shot on target after a quick counter-attack which found Salah but his powerful shot was punched over the crossbar by Mendy.

Senegal started the second with the same energy and intensity, but Egypt goalkeeper, Abougabal was in his element, making difficult saves to deny Senagal a goal.

It was one-way traffic in the second half but the most important thing in football was seen.

It went into extra time after it ended goalless. The extra time did not see any goal either, hence penalties must decide the winner.

The Egyptian were much confidence going into the penalty shootout. Senegalese captain Koulibaly scored first for Senegal before Zizo also scored for Egypt.

Abdou Diallo scored the second penalty for Senegal, but Mohamed Abdelmonem missed it to give Senegal hopes, only for Aboubagal to save Bouna Sarr penalty.

Egypt’s Marwan Hamdi scored to make it 2-2, but Ahmadou Bamba Dieng scored to give the Lions the advantage.

However, Mohamed Lasheen’s penalty was saved by Mendy.

Now Senegal needed to score their last penalty to be crowned Champions and Sadio Mane confidently stepped up and powerfully hit the back of the net to win Senegal first ever African Cup of Nations.

Senegal first-ever final was in Mali in 2002 where they lost to Cameroon on Penalties. In 2019 they went to their second final and again lost to Algeria.

2021 is their third final and they were third-time lucky, they have been crowned as the champions of Africa after edging Egypt in a penalty shoot-out.