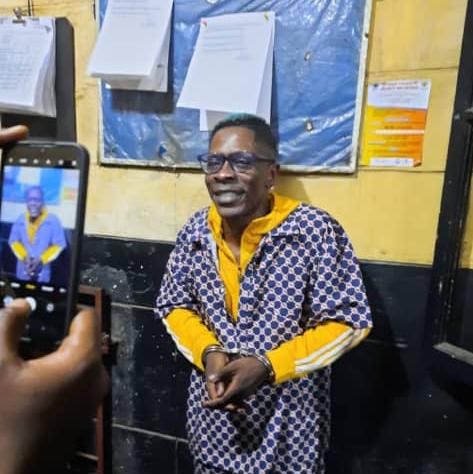 Apart from him, two persons are in police custody for spreading false information in connection with alleged gunshot attack on Shatta Wale.

Following a supposed shot assault, the Ghana Police Service is on a manhunt for renowned Ghanaian Dancehall Performer Shatta Wale.

The Ghana Police Service said in a statement on Monday that they had found ways to decide the whereabouts of the multi-award winning Reggae and Dancehall performer who was currently absent.

In a Facebook post, it added, “The attention of the Police has been drawn to the report on the supposed shooting of Charles Nii Armah Mensah, popularly in entertainment circles known as Shatta Wale.”

“After learning of the news, the police started an investigation into the case, which included reaching some of his loved ones, just as all of his associates.”

“Shatta Wale’s home has been searched, yet he has not been found.

“The police has been scanning clinics in Accra for Shatta Wale for the past couple of hours and keep on doing as such.

“While we proceed with our examinations, the Police are requesting that the public call the numbers 18555, 191 and 0302773906 with any data about Shatta Wale’s whereabouts.”

In the mean time, SM fans and Ghanaians are thinking about what is new with Shatta Wale, and regardless of whether the shooting gossip is actually an exposure trick for his impending collection, “Gift of God.”

Shatta Wale was brought into the world on October 17, 1984, and is a maker, reggae-dancehall craftsman, and entertainer.

He is generally known for his breakout hit tune Dancehall King, which procured him the Artiste of the Year award at the Ghana Music Awards in 2014.

Pastor who prophesied Shatta Wale will be shot dead arrested

African Editors’ sources have confirmed that Founder and General Overseer of New Life Kingdom Chapel International, Prophet Stephen Akwasi, also known in private life as Jesus Ahuofe, has been rounded up by the police on Tuesday morning at the forecourt of Accra100.5FM in Accra, Labone, Kweku Baako Street.

The latest arrest of the preacher Jesus Ahuofe follows his prophesy on September 28, 2021, that Dancehall Artiste Shatta Wale will be shot on October 18, 2021.

Three men clad in mufti, with the driver in a police uniform, picked up the prophet while he was standing by at the Accra FM premises ahead of a show he was supposed to appear on for interview known as Ayekoo Show being hosted by Nana Romeo.

The prophet had before shown his arrangements to report himself to the police after the show.

He was taken to the police base camp.

The police, in a statement prior, said it can’t locate the whereabouts of Shatta Wale.

The police said news broke out that Shatta Wale has been shot prompting them to look for him.

On hearing the news, the police noted that investigations was launched to trace Shatta Wale’s wherebouts from his loved ones and closed associates.

In the mean time, Shatta Wale says his life is under threats forcing him to be on the run until the nation shows him that there are laws to deal with happenings in Ghana.

He said this in a Facebook post after bits of gossip became famous online that he had been fired with a gun by some obscure shooters on Monday, 18 October 2021.

Founder and General Overseer of New Life Kingdom Chapel International, Stephen Akwasi, also called in private life as Jesus Ahuofe is currently in the custody of the police pending investigations.