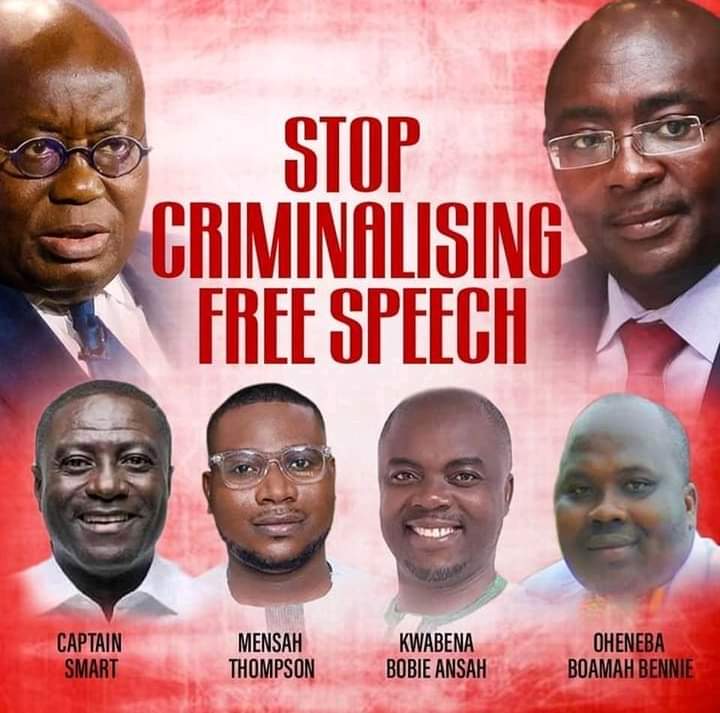 The National Democratic Congress has observed with utter dismay, the calculated onslaught on media freedom and free speech by the Nana Akufo Addo government, which is increasingly showing dictatorial and autocratic tendencies. The past few weeks have seen a dramatic upsurge in the criminalization of free speech as well as unbridled attack on the journalism profession.

There has been sharp deterioration in the expression of the right to free speech under the Presidency of a personality whose claim to fame as a human rights activist, was his work on the repeal of the Criminal Libel Law when he was an Attorney General. Recent events however, exposes duplicity and hypocrisy Mr. Akufo Addo’s. In short President Akufo Addo speaks from both sides of his mouth.

The nation is yet find answers to the barbaric murder of an investigative journalist, Mr. Ahmed Suale, following his expose of the involvement of the President and his Vice in the Kwesi Nyantekyi – bribery scandal. The peoples demand for justice has remained an illusion.

In the last few weeks, four journalists have suffered police brutalities and in some cases unfair judicial conviction. Journalist are being cowed into silence through the atmosphere of oppression and harassment. It is the modus operandi of autocrats and despots to create an atmosphere of fear to silent the voice of opposition and free speech. In all these the police appear complicit, aiding the oppressors to hound citizens of Ghana.

Last week a Media Generale Radio and TV presenter, Captain Smart was in a Rambo-style dragged into detention, after he had been granted bail by a court. Last Tuesday another radio presenter, Oheneba Boamah Bennie of Power Fm/TV XYZ was incarcerated for statements he allegedly made against the President. A civil society activist, Mr Mensah Thompson was arrested, detained, sent to court on criminal charges, granted bail and yet again detained all for being critical of President Akufo-Addo.

Another radio presenter Mr Kwabena Bobie Ansah of Accra Fm, , was last night arrested and detained in connection with a story of looting of state lands by Mrs. Rebecca Akufo Addo.

We consider the escalation of arrests and harassments as an attempt by the Akufo Addo junta to put fear in Ghanaians opposed to e-levy and douse the impact of the massive ‘Yentua Demonstration’ held in Accra yesterday. The NDC assures the despotic regime of Akufo Addo, that we shall not relent in our effort both within and outside Parliament to stop the introduction e-levy.

We are deeply worried by the loud silence of the Moral Society, large section of Civil Society and rather surprisingly the Ghana Journalists Association, whose members are under siege.

We take this opportunity to call on these groups to speak out against the blatant acts of repression being perpetrated against our young democracy. These groups should take note of the rising political instability in the sub-region and speak out now and not wait to until matters get out of hands before they host series of belated interventions and seminars on what went wrong.