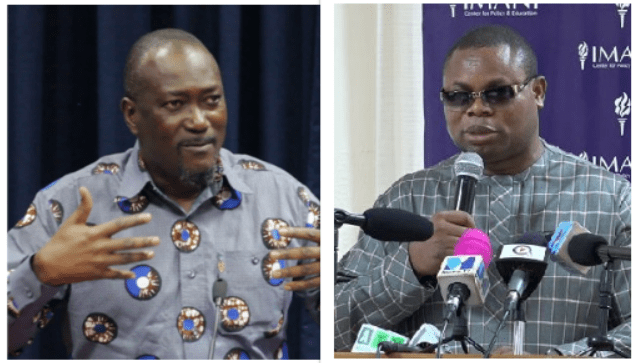 The underlisted Civil Society Organisations (CSOs) note with deep concern the apparent resurrection of the discredited criminal libel regime through a series of recent arrests and prosecution of persons for statements made or published in the media.

In the latest of such episodes, the Executive Director of the Alliance for Social Equity and Public Accountability (ASEPA), Mr. Mensah Thompson, is being prosecuted on a charge of publication of false news for making a post on his Facebook page on or about January 8, 2022, alleging that certain relatives of the President traveled to the United Kingdom on the official presidential jet for pleasure and shopping during the Christmas season.

His original post had called on the Ghana Armed Forces, among others, to explain the circumstances of the alleged use of the presidential jet by the President’s alleged family members.

Mr. Thompson was reportedly arrested and detained at the Teshie District Command of the Ghana Police Service on Wednesday, February 9, 2022. He was subsequently charged with the publication of false news and offensive conduct conducive to the breach of peace. On Thursday, February 10, 2022, he pleaded not guilty to these charges and was granted bail by the Kaneshie District Court.

We are deeply troubled by the growing use of the prosecutorial and judicial power of the State to punish criminally speech that allegedly falsely injures or damages the reputation of other persons or of an institution of state. Instructively, during the heyday of the criminal libel law in the 1990s, the criminal law was used in precisely the way it is now being used: to prosecute and punish journalists and public speakers for allegedly false or defamatory statements against certain family members or associates of the President.

Our legal system provides noncriminal or civil avenues for dealing with uses of free speech that injure or infringe on the rights of others. The abolition of criminal libel in the aftermath of the Rawlings regime in 2001, a move popularly championed by President Akufo Addo during his tenure as a private lawyer representing journalists and media houses and, later, in his capacity as Attorney-General, left injured parties free to resort to civil alternatives and remedies to deal with false and libelous publications.

Moreover, the law provides offending parties the prospect of avoiding even civil liability by retracting the offending publication and rendering appropriate apology to the injured or offended party.

As a tool for regulating speech, the criminal law is fraught with the danger of politicization and selective prosecution, as it leaves it to a party-aligned attorney-general, an appointee who serves at the pleasure of the President, to determine which or whose allegedly false speech or publication to prosecute and which or whose speech to ignore. A return to the use of criminal law enforcement and prosecution to regulate and punish speech would take us back to a

bygone authoritarian era where journalists and others public speakers were jailed for politically disagreeable libel.

We implore the Attorney-General to discontinue the prosecution of Mr. Thompson and take steps to stop all persons acting under his authority from re-introducing in another guise the long-discredited and abolished criminal libel regime. We also urge media practitioners and users to tone down the inflammatory rhetoric that has contaminated our public square and airwaves, desist from knowingly or recklessly making or publishing false statements, and use, to the extent possible, the Right to Information Act and its processes to access information from public authorities.