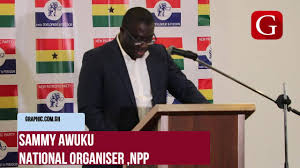 I took over a bankrupt NLA- Sammy Awuku

The newly appointed Managing director of National Lottery Authority( NLA), Sammy Awuku has said, the NLA was on a verge  whof insolvency when he took over early this year.

There were series of protests and demonstrations from the NLA workers against the immediate past MD Osei Ameyaw over none payment of wins and other issues.

The president named Sammy Awuku as the new Managing Director(MD) of the NLA this year after Osei Ameyaw was asked to go on retirement.

NLA was struggling with payment of wins before Mr. Awuku took over. Winners of NLA lottery were told to wait six months to get paid and none availability of paper roll for LMC’s.

Mr. Awuku who met the LMC’s on Friday, 29th October 2021 said he took over a collapsing NLA, but he has managed to pay all the wins that were pilled up.

” I came to meet a bankrupt company, but I have managed to pay all the debts”

The eroded confidence appears to be coming back under the current administration.