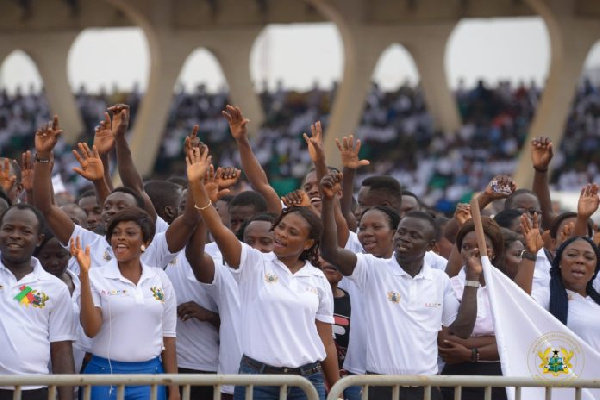 Members of the Nation Builders’ Corp Trainees Association of Ghana (NABTAG) have served notice to picket at Ghana’s Presidency, Jubilee House, in Accra on August 10, 2022, over refusal of government to pay stipends and the impending end of the programme.

The disgruntled trainees are also demanding that the government reconsider its decision to impose the YouStart programme on them and rather provide them with permanent jobs as promised ahead of crucial 2020 elections.

Addressing a press conference in Kumasi on Friday, 29 July, 2022, the President of the group, Dennis Opoku Okatakyie said they have not been paid for the past nine months which is making life unbearable for them.

He also urged the government to reconsider its decision to cancel the NABCO and impose the YouStart on them.

The group, he said is going to petition Asantehene Otumfuo Osei Tutu II, to intervene on their behalf.

He said they are also going to petition the Vice President, Dr Mahamudu Bawumia as well as the Chief of Staff to remind them of the need to pay them and ensure they are employed permanently.

Presenting the Mid-Year budget, Finance Minister, Ken Ofori-Atta announced that the NaBCo programme will be completed by 1st September 2022.

“So far, we have invested approximately GH¢2.2 billion. As they exit, the current cohort on the programme are encouraged to take advantage of the YouStart initiative and other existing programmes in our drive to build an entrepreneurial nation”, he urged

In this article:at presidency Aug 10,NABCO trainees to picket,Unpaid allowance: