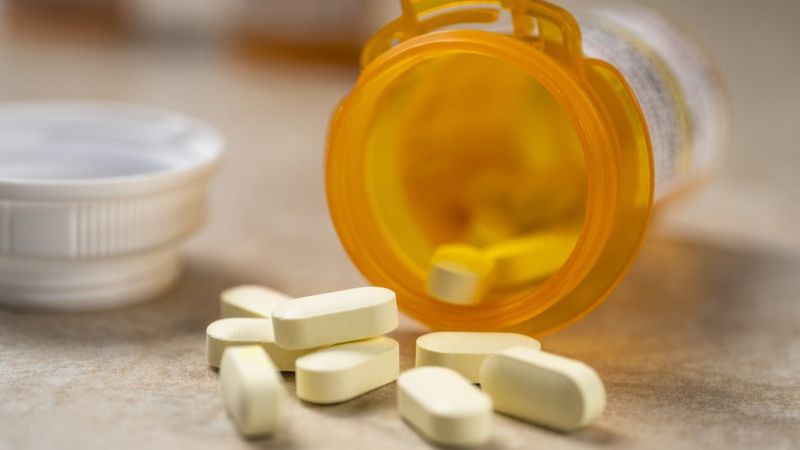 The money will be used to help combat the impact of the crisis in Lake and Trumbull counties.

The companies plan to appeal.

Millions of people in the US have become addicted to opiate-based painkillers such as fentanyl and OxyContin over the last 20 years.

Nearly half a million deaths were attributed to painkiller overdoses between 1999 and 2019.

In court, attorneys for Lake and Trumbull counties – both near Cleveland – put the total financial cost of the crisis at $3.3 billion.

Both counties, like other other jurisdictions across the US, have argued that the crisis has put an enormous strain on local resources, social programmes and legal systems.

Failure to ensure that prescriptions were valid, their attorneys have argued, created a public nuisance as vast quantities of pills flooded their communities.

Between 2012 and 2016, more than 80 million painkillers were reportedly distributed in Trumbull County – about 400 pills per resident.

In Lake County, the figure stood at 61 million pills over the same time frame.

In the short-term, the three companies have been ordered to pay about $87m to cover the first two years of the plan.

The ruling was quickly praised by officials from both counties.

Commissioner John Hamercheck, for example, said that the ruling “marks the start of a new day in our fight to end the opioid crisis”.

The three companies have repeatedly denied the allegations and claimed they attempted to prevent painkillers from being diverted towards illicit use. Additionally, they argued that it was doctors – rather than pharmacies – that ultimately determined how many pills were prescribed and to whom.

When contacted by the BBC, all three companies said they will appeal the ruling.

“We never manufactured or marketed opioids nor did we distribute them to the ‘pill mills’ and internet pharmacies that fuelled this crisis,” Walgreens said in a statement.

“The plaintiffs’ attempt to resolve the opioid crisis with an unprecedented expansion of public nuisance law is misguided and unsustainable,” the statement added.

More than 3,000 lawsuits have been filed against opioid manufacturers and pharmacies in the hopes of recouping the costs spent combating the crisis.