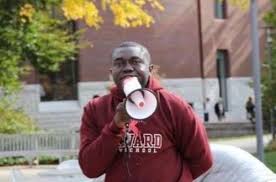 #FixTheCountry Movement Convener Oliver Barker-Vormawor who is currently in Police custody has called on the media to verify from Parliamentary records whether he was a Presidential Staffer under former President John Dramani Mahama.

“I am also asking the media to verify from Parliamentary records, as to whether I was ever a Presidential Staffer,” a statement issued and signed by Barker-Vormawor on Sunday, 21 February 2022 said.

According to the Convener, Abronye DC has been making a “factually inaccurate statement” for nearly a year now, suggesting that he was a presidential staffer in the office of the former President Mahama.

Mr. Barker-Vormawor, however noted that his name did not appear on the list of presidential appointees.

The statement added: “As the Police will confirm, the list does not contain my name, and there is no record anywhere that presents me as a presidential appointee to who the term presidential staffer properly applies.”

Meanwhile, the convener, who has been charged with treason felony by the police, has reportedly suspended his hunger strike while in detention.

He made his first appearance at the Ashaiman District Court on Monday, February 14 where he was denied bail and remanded into custody.

The Presiding Judge, Her Honour Eleanor Barnes said taking into consideration the nature of the offence, her court does not have jurisdiction to grant bail.

She, however, directed that Mr. of Oliver Barker-Vormawor be allowed access to his lawyer, and three family members from 10am to 4pm daily.

The Cambridge Researcher Barker-Vormawor was arrested on Friday, 11 February 2022 at the Kotoka International Airport upon arrival from UK for allegedly making coup threats on social media.

The Police has indicated that his “post contained a clear statement of intent with a possible will to execute a coup in his declaration of intent to subvert the constitution of the Republic”.

It is important to anchor the point that the #FixTheCountry Movement has revealed that it will raise funds to cater for legal fees of their Convenor currently in custody.

In this article:Barker-V to media,if I was a Presidential Staffer -,Verify from records