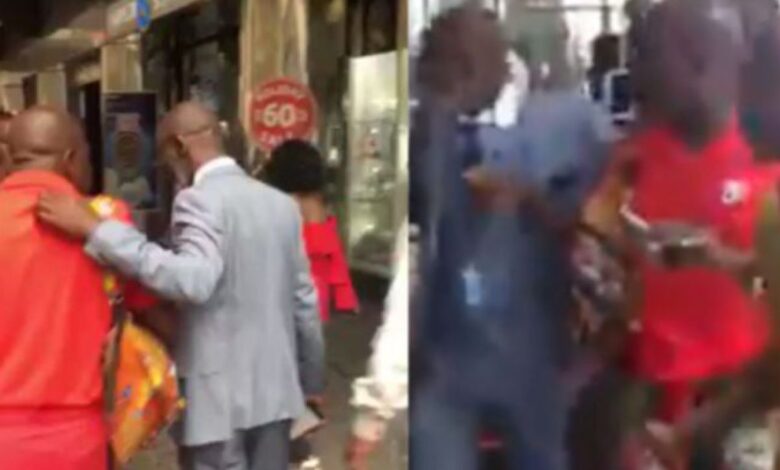 Drama and fireworks unfolded in the streets of New York, USA when some disgruntled Ghanaians openly confronted Gabby Asare Octchere-Darko and Citi FM Boss Sammy for bad governance in Ghana under President Akufo-Addo, accusing them of benefiting from democratic dividends and largesse at the expense of poor taxpayers simply because the two are closed to the corridors of power.

In the video, the angry Ghanaians were seen accusing Gabby and Sammy of enjoying the benefits and largesse at the expense of ordinary taxpayers.

Gabby who would neither deny, defend or confirm the allegations at the most disgraceful moment had to resort to phone calls to calm tempers without reprisals whilst Sammy attempted to defend himself but unsuccessful in a near open confrontation.

Sammy who was accused openly together with Gabby by the angry Ghanaians in the streets of New York was compelled by the intense pressures being mounted on him to further explain to them that the trip to US was a private one but they insisted that it was government-sponsored, accusing the two of overly benefiting from the largesse and democratic dividends at the expense of Ghanaians because they are closed to President Akufo-Addo.

Sammy told them that “I can show you my passport”, but the angry Ghanaians would simply not take it.

In this article:Sammy in New York,USA,VIDEO: Drama as angry Ghanaians openly confront Gabby