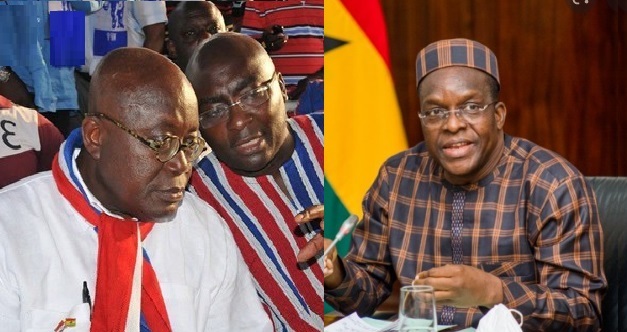 BELOW IS THE FULL PRESS RELEASE:

Our attention has been drawn to the awkward withdrawal of the military attachment that forms part of the Rt. Hon. Alban Sumana Kingsford Bagbin’s security detail. What is even more disappointing and bizarre is the rather weak attempt by the Ministry of National Security to rationalize such an embarrassing act.
We view the withdrawal of the military personnel as an attempt by President Akufo-Addo to expose the Rt. Hon. Speaker of Parliament to danger. It is nothing but a petty reactionary move by the President to show the Rt. Hon. Speaker of Parliament where power lies and it is designed to intimidate the Speaker of Parliament to kowtow to the demands of the executive by compromising the independence of Parliament which the Speaker has sworn to protect in the ultimate interest of Ghanaians..

The withdrawal of the military attachment is part of a psychological warfare being waged on the Rt. Hon. Speaker by the Akufo-Addo government. This is happening at a time when government is fully aware that the Rt. Honourable Speaker is currently undergoing medical treatment and therefore shows how insensitive the Akufo-Addo government is. It would be recalled that as part of the psychological warfare, government recently leaked communication on the Speaker’s medical review on social media to expose him to further harm and make it appear as though Speaker Bagbin is the only Speaker enjoying such a facility when in fact most government officials and previous Speakers and leaders of Parliament enjoyed and continue to enjoy such a facility. We are confident that the Rt. Hon. A.S.K. Bagbin will not be perturbed by such shameless acts of cowardice by the President.

This development is not surprising as it confirms the idiosyncrasies of President Akufo-Addo as someone who is quick tempered and highly vindictive. Ghanaians would recall that in 2006, the same Nana Akufo-Addo who was then Minister for Foreign Affairs caused to be withdrawn the privileges due the late former President Rawlings for being critical of the NPP government.

Again, since President Akufo-Addo assumed office as president, Ghanaians themselves are witnesses to how journalists and other persons who are critical of the government have been attacked. In the case of Members of Parliament who criticize government, they are being hounded and threatened with prosecution over flimsy charges. He caused to be closed down hundreds of radio stations who are critical of his government.

This latest act by the President only goes to confirm his true character as intolerant, quick tempered and petty.
We wish to state for the records as follows:
We note that the letter from the Armed Forces dated 11th January, 2022 and signed by the Chief of Staff; Major General NP Andoh claimed that the officers were attached to the Office of the Rt. Hon. Speaker of Parliament ‘without proper procedure’. He further stated that the withdrawal was pending efforts to regularize the attachment of the officers.

The statement by the National Security Ministry on the other hand was to the effect that the military do not form part of the Speaker’s Security detail hence the withdrawal.
The National Security Ministry’s statement clearly contradicts that of the Armed Forces High Command and can therefore not be relied upon since it flies in the face of the facts.
In any case, if the National Security Ministry’s statement that the Speaker is not entitled to military protection is anything to go by, how would they explain the military protection offered to lower rank government officials and appointees such as Godfred Dame, Attorney-General and Minister for Justice, Jean Adukwei Mensah, Chairperson of the Electoral Commission; Kissi Agyabeng, Special Prosecutor and other private individuals who enjoy military protection?
We find it strange and disturbing that it has taken the Military High Command, which is very well respected for its efficiency and competence, over a year to notice that the military attachment to the office of the Speaker did not conform to due process.
If the so-called withdrawal of the military personnel with the intention to regularize same was in good faith, why wouldn’t the Military High Command rather take steps to regularize the attachment?
The Ghana Armed Forces is not one of the Akufo-Addo vigilante groups that should be manipulated at the whims and caprices of the President.
This is another example of an assault on our democracy, and the brigandry and banditry that has characterised the actions of the Akufo Addo led government must come to a halt and government must unreservedly apologize to the Rt. Honourable Speaker of Parliament for such an embarrassment.
We hereby serve notice, that the Minority Caucus in Parliament will, in the coming weeks, embark on a series of actions to ensure that the Rt. Honourable Speaker is provided adequate protection.
We however wish to state unequivocally that the NDC will hold the Akufo-Addo led government responsible for the security and safety of Rt.Hon.A.S.K Bagbin.