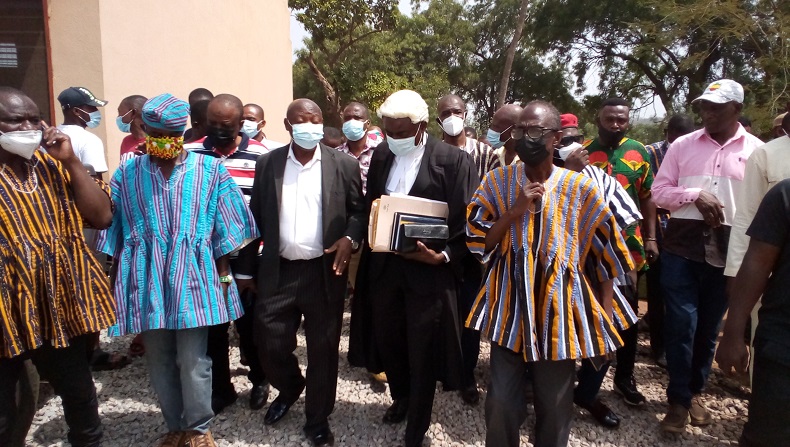 Below is what transpired during court proceedings:

Parties
1. The Petitioner: Christopher Beyere Baasongti was personally in court.

Legal Representation
1. Justin Pwavra Teriwajah Esq. for the Petitioner.
2. Emmanuel Addai Esq. for the 2nd Respondent.
3. Counsel for the 1st Respondent was not in court.

Business of the Day!
Counsel for the 2nd Respondent commenced his cross-examination of the Petitioner’s star witness, Hameed Bin Laden;

1. You are the Director for the for the NDC, Techiman South. Is that not so?
Ans. My Lord, precisely so.

2. As the Director, you have participated in seminars, workshops and training programs organized by the Electoral Commission for the candidates and their agents. Is that correct?
Ans: My Lord, for the 2020 Elections, such seminars were not organized for the reasons best known to them.
Witness said, he rather attended DIPAC meetings.
3. How long have you been the Elections Director for the NDC?
Ans: I have been in this position since 2018.

4. Apart from this position, have you ever acted in any capacity as far as the NDC is concerned?
Ans: My Lord, I have been an active member for the past 20 years.

9. You were at the Collation Center with Eric Pienaa, Ishaq Nai-Abdulai and Abubakar Awudu. Is that right?
Ans: That’s correct, my Lord. The four of us were the accredited collation agents.

11. This is evident when you read paragraph 24 of your own witness statement, when the Petitioner joined you to make a protest after the results had been declared by the Returning Officer of the Electoral Commission.
Ans: My Lord, that is totally wrong. In any case, counsel first claimed that we interfered with the Collation process, but surprisingly, counsel is now talking about declaration.
The Returning Officer did not do what the law provides because declaration cannot precede collation. Therefore, we protested against the unlawful thing.

12. Confirm your full name to this court.
Ans: My Lord, Abdul- Hameed Zakaria is my full name. Abdul-Hameed, hyphenated.

13. And you are also known as Bin Laden?
Ans: That is very very correct.

14. You were named after Osama Bin Laden of Afghanistan!
Ans: My Lord, that is very wrong, I was not named after him.

16. In the said interview, you spoke Twi language?
Ans: Yes, that is correct.

17. In the same interview you granted with Akina Radio, you also said that Returning Officer declared the figures from his head.
Ans: My Lord, I stated that, considering the Form 1C, which the 2nd Respondent presented to this court, I am sure the Returning Officer did the collation in his kitchen or his bedroom, that is why he changed figures of some of our polling stations.

18. I am suggesting to you that, your conduct was unlawful as a Director of Elections!
Ans: My Lord, this suggestion by counsel is illegitimate. I disagree, my Lord.
The suggestion is unacceptable. Because, there was no collation of any results, so there cannot be any conduct in relation to me.

After this very question, the counsel for 2nd Respondent, Emmanuel Addai Esq announced to the open court that he has ended his cross-examination of the Petitioner’s star witness, Hameed Zakaria Bin Laden.