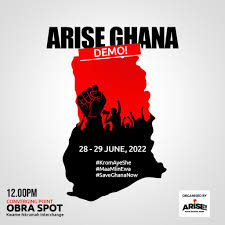 Criminal Division of Accra High Court has granted an application from the Ghana Police Service to stop Arise Ghana from embarking on a demonstration at
The police ran to the court to prevent the demonstrators from demonstrating up until 10pm after they failed to reach an agreement with organisers of the match.

The court presided over by Justice Comfort Tasiame granting the Police application said, the demonstrators should converge at Obra Spot through Farrisco Avenue to TUC and end at the Independent Square.

The court also said, the intended demonstration should start at 8am and end at 4pm not 10pm as the organisers had planned.

The Arise Ghana demonstration scheduled for tomorrow, 28 June 2022 is against the harsh economic conditions in the country, rising external debt stock from GHC 120 in 2016 to GHC 400 billion in 2022, debt to GDP standing at 82%, non-payment of statutory funds including National Health Insurance fund, District Assembly Common Fund, hikes in petrol, food, general high cost of living, 27.6% inflation, obnoxious policies, and decisions of the Akufo-Addo-Bawumia-led Administration.

In this article:- Court to Arise Ghana,29,up to 4pm on June 28,You can demonstrate