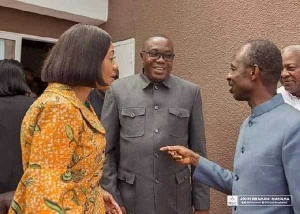 “You can’t direct us to IPAC, implement our reforms”- NDC

General Secretary of NDC Johnson Asiedu Nketia has taken a swipe at Jean Mensah-led Electoral Commission for asking biggest opposition party to take its call for electoral reforms ahead of 2024 polls to Inter Party Advisory Committee (IPAC) for consideration.

Speaking at a press conference in Accra on Tuesday 24 August 2021, Asiedu Nketia said “Jean Mensah-led Electoral Commission is in hurry to close future presidential and parliamentary elections at 3pm, attempting to fix imaginary problem that doesn’t exist at the expense of the core problems recorded during the 2020 polls. Who has complained about closing of polls at 5pm?”.

In a sharp rebuttal, a Member of NPP Legal Team Garry Nimako Marfo said “the NDC is simply on agenda to tarnish the image of the EC Chairperson Jean Mensa.

Meanwhile, National Democratic Congress, NDC has asked President Akufo-Addo to initiate urgent processes to amend aspects of the 1992 Constitution in line with the white paper on the report of the Constitutional Review Commission (CRC).

President Akufo-Addo during his meeting with anti-graft institutions, warned that citizens who are pushing for wholesale amendment of the constitution should be very careful because the entire assignment undertaken by the Constitutional Review Commission constituted by Ghana’s late President Prof. John Evans Atta Mills was illegitimate.

Apart from that, the 1992 supreme law has succeeded in putting Ghana’s democratic experiment on the path of progress for almost 30 years as compared others which were outmoded by birth.

But, according to the opposition party, the president must go back to the drawing board and amend his position on the matter because the Supreme Court had already upheld the work of the Constitutional Review Commission when the matter was legally challenged by the University of Florida, USA Lawyer Prof. Kwaku Asare.

Speaking at a press conference in Accra on Tuesday 24 August 2021, NDC’s Director of Electoral Reforms Nana Ato Dadzie said “Mr. President, your position expressed that you’ll not amend the 1992 Constitution because the work of the Constitutional Review Commission was fraud when you met anti-graft bodies is wrong because the Supreme Court has settled the matter. We demand that you initiate processes to amend the constitution”.