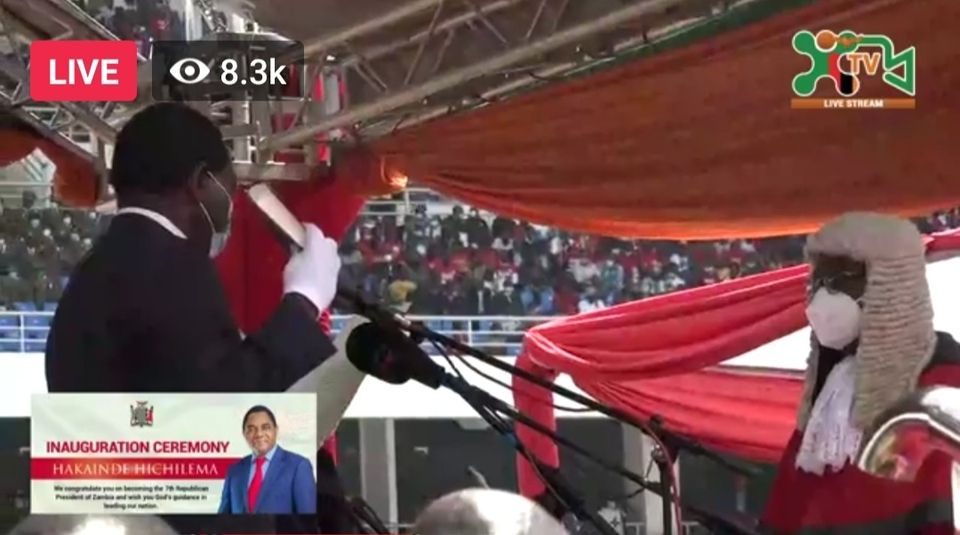 President Hichilema, known in private life as ‘HH’ or ‘Bally’ – an informal term for father, has promised to tackle head-on the economic crisis of Zambia by cleaning up the financial sector.

The Newly elected President of Zambia Hakainde Hichilema was sworn in today after his landslide victory over authoritarianism and a shining example to African democratic experiment.

Hichilema, 59, took the oath of office for the presidency on Tuesday 24 August 2021 before thousands of political loyalists, supporters who assembled at the Heroes Stadium in the Capital, Lusaka, clad in the red-and-yellow regalia of his United Party for National Development.

It has emerged that many spent the night at the venue to secure a seat, cheering Ex-president Edgar Lungu’s third time political rival Hakainde Hichilema majestically stepped out of a white SUV in a face mask, dark suit and red tie, waving white-gloved hands with his security detail struggling to control the most enthusiastic crowd.

President-Elect Hichilema polled over one million votes difference to win the knife-edge polls in Zambia despite total shutdown of social media- WhatsApp and Twitter, a deliberate decision by the governing party to build a culture of silence on crucial voting day.