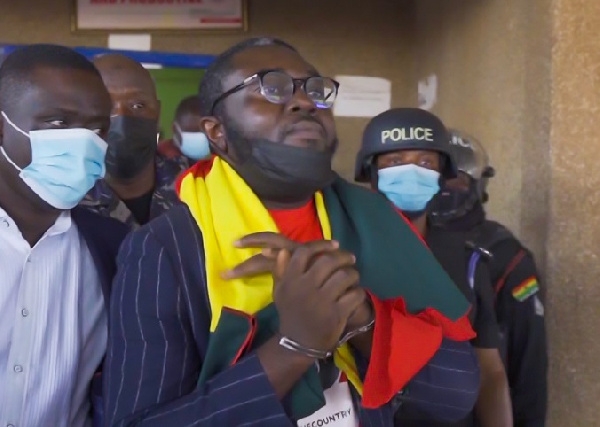 Barker-V dares AG to prosecute him

#FixTheCountry Lead Convener Oliver Barker-Vormawor has dared the Attorney General to prosecute him if he has watertight evidence to legally nail him on the charge of treason felony proffered against him. The accused who has challenged the earlier submission by the AG that he is a fright risk if granted bail, says he will be available for the trial if the the Government’s Chief Legal Advisor proceeds with the matter in court.

Barker-Vormawor has told the Tema High Court in the Greater Accra Region that he is in “good health” and “prepared to stand trial” for treason felony with which he has been charged for threatening a coup in a social media comment.

Barker-Vormawor, who has been in detention since February 11, 2022, told the court presided over by Justice Daniel Mensah that he hopes “they [prosecution] take the matter up for trial.”

Mr. Barker-Vormawor’s lead counsel, Mr Akoto Ampaw, who moved the bail application said although his clients comments were “reckless and condemnable”, they do not merit the charge levelled against him.

He argued that nothing shows that his client has prepared or shown an endeavour to carry out his conditional threat.

In his view, instead of the prosecution jumping the gun, the police could have first put his client under surveillance over his “youthful exuberant and empty talk”.

For her part, a Senior state attorney Hilda Craig said all offences are bailable, there was the need to meet certain conditions for it.

In her view, the accused persons intended to carry out his coup threat judging from his behavior – flying down to Ghana after his post to prepare and carry out his intention and, thus, highly likely to be a flight risk if granted bail.

She told the court that the applicant has no fixed place of abode since he is just lodging with people.

Also, she told the court that Mr Barker-Vormawor has been “intolerant and abusive in custody”.

Lead Counsel for Mr Barker-Vormawor, Mr Akoto Ampaw, argued that the Facebook post by his client was a conditional phrase with respect to coups in the sub-region.

He noted that the post did not constitute a crime by Ghana’s laws.

He further argued that his client is not a flight risk.

But, Senior State Attorney Hilda Craig told the court that the accused person’s social media post showed a statement of intent, which he followed through by coming to Ghana.

She noted that Mr Barker-Vormawor does not have a fixed abode in the country and also indicated that the attitude displayed by the PhD students in detention is evidence enough that he would not assist with investigations if granted bail.

Judge Daniel Mensah, after hearing both arguments, adjourned the ruling to Wednesday, 16 March.