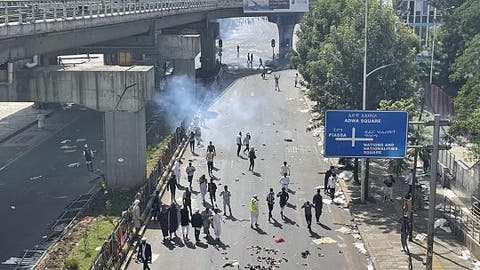 Ethiopian police used tear gas and briefly clashed with young Muslims in the capital on Monday during prayers to mark the end of Ramadan.

The Ethiopian capital saw scenes of panic on Monday. Police fired tear gas at Muslim protesters on the fringes of prayers marking the end of Ramadan. The incident occurred outside the Addis Ababa international stadium and the Addis police called it “a riot” caused by a “few individuals”.

An official said, a policeman unintentionally fired tear gas at the crowd when some faithful started to chant slogans and throw stones. The Addis police issued a statement saying property had been damaged before order was restored.

“This is one of our Eid celebration, our holiday, annually, it comes every year, once a year, so I need to deliver a message for all Muslims to look (after) poor people, to help them, to work with others, and Muslims and with government.”

The stadium was so full for the Eid celebration that some worshippers gathered in the Meskel Square to pray.

Anti-Muslim violence
The confrontation follows anti-Muslim attacks that took place in the north of the country last week. On Tuesday, April 25 an attack was carried out during a Muslim burial at the Sheikh Elias Cemetery in the predominantly Christian city of Gondar. “The organised armed group in Gondar which staged the attack with bombs and machine guns are accountable for what happened there”, Ustaz Mohammed, Board member of Addis Ababa Muslim council says.

Ethiopia is a majority Christian country and around 30 percent of the population are Muslim.

In this article:Ethiopia:,Police and protesters clash during Eid celebrations