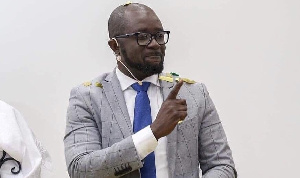 Ghana Football Association(GFA) has issued a statement making clear his intention to investigate alleged match fixing scandal on 34 week between AshGold and relegated Inter Allies, where AshGold won by 7goals to 0

The last round of matches in the Ghana premier league took place last weekend which saw Hearts of Oak crown as champions in Sogakope.

But the main headline coming out of the weekend matches is that the match between Obuasi based AshGold vs already-relegated side Inter Allies was deliberately fixed to enable Ashgold hammer his contender Inter Allies 7: 1.

The match ended 7-1 in favour of the home side, Ashgold which saw weird two own goals.

The circumstances leading to these goals have raised eyebrows and got many people talking on social media about how some club officials are benefiting from these score lines.

The GFA has since issued a statement about the scandal and called on the clubs involved to avail themselves for investigation.

Below is the full statement by the GFA:

Ghana Football Association (GFA) wishes to inform all its members and the public that the Association has opened investigations into the Ghana Premier League Match-day 34 game played between Ashanti Gold SC and Inter Allies FC at the Len Clay stadium at Obuasi on Saturday, July 17, 2021. The GFA has resolved that:

1. The Compliance & Integrity Officer and the GFA Prosecutors will lead the “sporting” investigations by the GFA, and

2. The Association will further lodge a complaint on the match with the Criminal Investigation Department (CID) of the Ghana Police Service and the Ghana wing of Interpol for the criminal investigation of the game.

The Association will immediately require statements from the two clubs and the players and the technical team members of the two clubs.

The GFA further urges any member of the public, the media, players, technical team members to also send any evidence or information whatsoever connected to the match (a statement, video, audio etc) to assist the investigations through the GFA integrity Hotline and email.

GFA INTEGRITY HOTLINE As provided for in the GFA Statutes and emphasised during all the training the GFA gave to clubs and match officials before the start of the league, one of the core objectives of the Ghana Football Association (GFA) is the commitment to promote the integrity of football in Ghana.