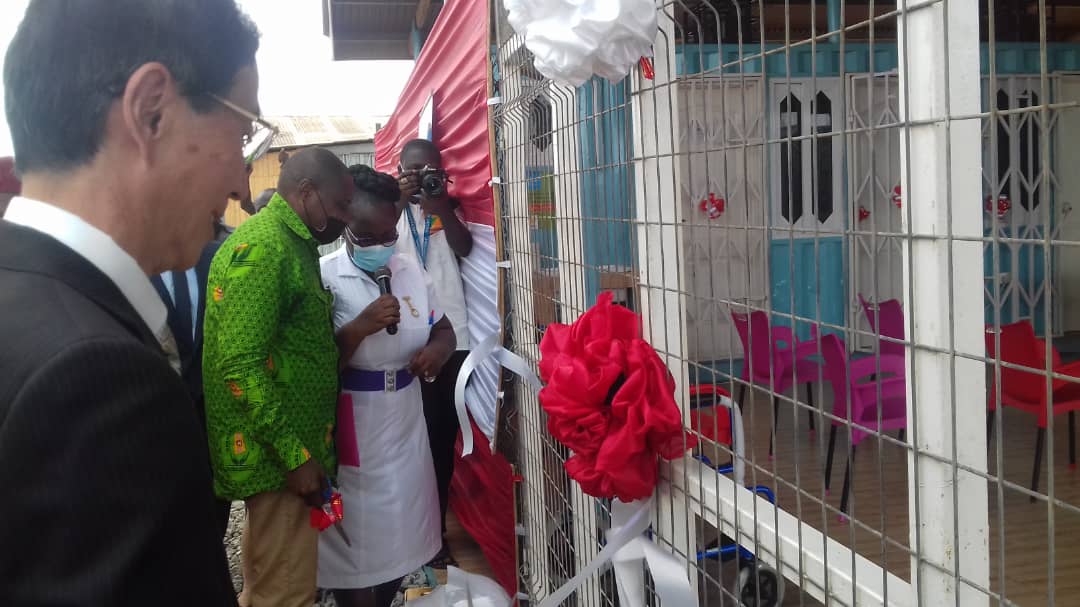 As part of the activity to support the vulnerable in the health sector, the United Nations Development Programme (UNDP) with funding from the Japanese Government has handed-over a newly-established Community-based Health Planning and Services (CHPS) compound to the Ghana Health Service (GHS) at Chorkor-chemuenaa in the Ablekuma South Constituency.

The facility which was implemented by UNDP at a cost of $60,000.00 is aimed at strengthening community health system to support the continuity of essential services for the vulnerable during and post-COVID-19 pandemic.

The project further focuses on strengthening the capabilities of communities, health facilities, vulnerable groups such as women, children, persons living with NCDs, slum dwellers among others for the uptake of health services during and post-COVID-19 pandemic.

It was also to continued essential service provision and management of COVID-19 and future pandemic in the country.

Speaking the ceremony, the Deputy Resident Representative at UNDP, Sukhrob Khoshukhamedov expressed his appreciation to the Japan government and other stakeholders who made it possible towards the establishment of such health facility in the Chorkor-Chemunaa community.

He said the CHPS compound is a pragmatic strategy aimed at promoting access and equity in health service provision and bringing health services close to communities in deprived, hard-to-reach or the vulnerable.

“Through this concept, communities have been actively and meaningfully engaged in planning and delivering healthcare and have been empowered to become players and partners in their own health and well-being”, he noted.

According to the UNDP Resident Rep. it is needless to note that the effective implementation of CHPS concept would be critical if the country is to attain the universal health coverage as well as the Sustainable Development Goal 3 which is aimed at ensuring healthy lives and promoting well-being for all ages.

Mr. Khoshukhamedov continued that the facility would ensure quality healthcare, strengthen access to healthcare and provide better health outcomes within Chorkor-Chemuenaa and its immediate environs.

Ambassador of Extraodinary and Plenipotentialy at the Japan Embassy, Mochizuki Hisanobu also noted that the government of Japan on the verge of establishing many of such facilities in order to curb and reduce the rate of highly infectious diseases and maintain good health in the country.

He explained that through the close relation that exist between the two countries, the Japan government has been assisting Ghana over the last five decades and therefore his government would continue such assistance in the health sector within the local communities like Chorkor and other communities .

The Ambassador advised residents to make proper use of the facility for their own benefit which can lead to a healthy lifestyle and good living conditions.

He again stressed that the Japan government in collaboration with the International community have taken the initiative to provide financial assistance to Ghana to establish health centers both in large and small-scale as well as schemes based on the request from local communities.

The Member of Parliament (MP) for Ablekuma South, Alfred Okoe Vanderpuye also thanked the stakeholders for establishing such facility in the area which would serve as a fortune and good opportunity for residents to access healthcare with ease.

He assured residents of providing adequate security for the facility in order to prevent any theft, destruction and mismanagement of the facility.

“We will put measures in place when the place is put into full service, I including the Chiefs and elders, Youth groups, health management among others would ensure that whatever security needed would be provided to protect the equipment and the facility as well”, he added.

The Ablekuma South Sub-Metro Director of Health, Dr. Shallotte Alberta Caito explained how the facility would be of great help to the over two-thousand residents and its environs, adding that, such facility would enhance the services which they provide previously within the community.

“Before this edifice was put up, we operate in front of people’s houses, kiosk and in the open as we offer some service to children under 5 that includes immunization, weighing among other and so, this facility would enhance the service we provide to residents in the community”, she noted.

Also, the Chief of Chorkor-Chemuenaa, Nii Adotey Barima II acknowledged the effort of both the Japan government and the UNDP for undertaking such initiative to bring healthcare closer to the people in the local community, adding that, the populated residents would make good use of the facility to ensure better life.

Present at the hand-over ceremony were the Chiefs, Queen mothers and elders of the area, Staff of GHS, the Assemblyman of Chorkor, Youth and residents in the community and among others.