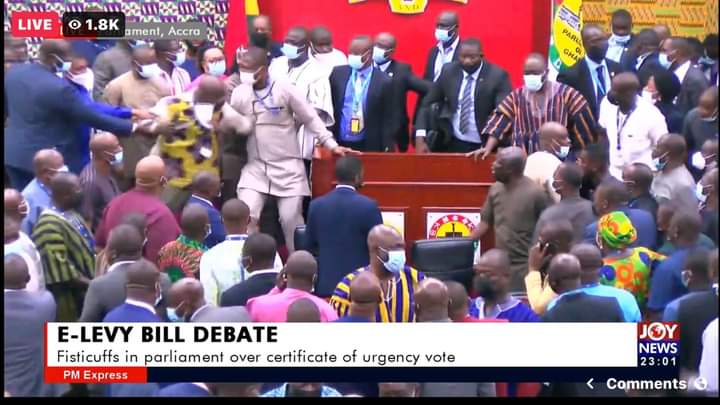 Minority in Parliament has dared the Supreme Court judges to come to the chamber to enforce their recent ruling that a Deputy Speaker presiding over the business of the house has voting rights.
“Folks, we wait to see who will enter the chamber of parliament to restrain us from preventing an attempt by a presiding Deputy Speaker to vote,” Dr Clement Apaak, the National Democratic Congress’ Member of Parliament for Builsa South in the Upper East Region said in a Facebook post on Thursday, March 10, 2022.

He stated that the Supreme Court does not decide what happens in Parliament but rather the Constitution and standing orders do.

“We resisted attempts to use all kinds of schemes and plots, including a military invasion of the Chamber of Parliament, to get Rt. Hon. Mike Oquaye, their preferred, elected in the early hours of January 7, 2020”.

“We stood our grounds, resisted the oppression and oppressors, and voted for Rt. Hon. Speaker Alban Sumana Bagbin as Speaker of this 8th Parliament. He was elected, he didn’t become Speaker by conferment and consensus as claimed by some dishonest and insincere elements,” he stated.

Dr Apaak said the Minority will “continue to resist any attempt by other arms of government to meddle with the work of Parliament”, adding: “Parliament is a master of its rules, we make our rules and they are not at variance with the constituency.”

“And, yes, the Supreme Court’s ruling is judicial support for the killer E-Levy. However, this will not change our resolve to vote 137 No, against the much-hated, rejected, and obnoxious extortion scheme called E-levy,” he added.

The Supreme Court on Thursday, 10 March 2022 in a 7-0 decision ruled that Deputy Speakers presiding as speakers in parliament have voting rights.

The opposition NDC and its Minority in parliament unhappy with the ruling, have described it as a judicial interference in parliamentary practice.

In this article:"Let's see who will stop,Minority,us from preventing presiding Deputy Speaker from voting"