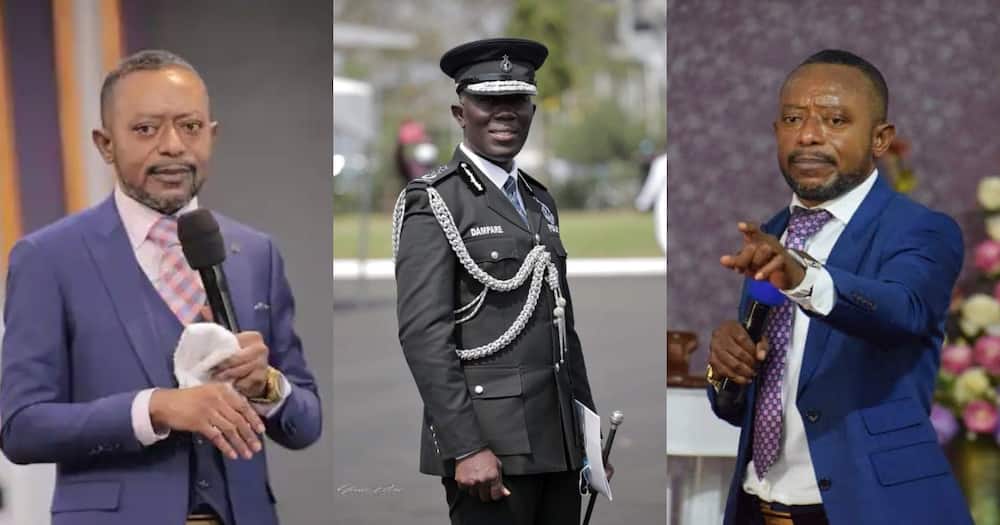 31st Night: ‘Do your work and allow me to do my prophetic work’- Bempah to IGP, drops coded prophecies

Founder of Glorious Word and Power Ministries International Apostle Dr. Isaac Owusu-Bempah has asked Inspector General of Police (IGP) Dr. George Akuffo Dampare to focus on his core mandate of combating crime and desist from meddling in the affairs of prophets, prophecies meant to be digested with spiritual insights and divine authority.

According to him, prophecies in the land have never been the cause of Ghana’s unbearable problems facing the citizenry, adding that the inability of persons including IGP Dampare to meaningfully interpret and digest prophecies because they are spiritually handicapped, implies that they are better off if they completely stay away from the contents of same or seek counseling and consultations from major prophets like him (Rev. Bempah) before issuing warnings on the matter.

He urged the Inspector-General of Police, George Akuffo Dampare to consult him for tutorials and lessons on prophetic matters before issuing out statement seeking to warn prophets on prophecies.

“IGP Dampare, you want to take decision on prophecies, and you were consulting people who are not prophets? Let’s me do my prophetic work whilst you focus on your core mandate of fighting crime. Consult experienced prophet like me before issuing such statement on prophecies”.

“If IGP Dampare wants people to brainstorm the issue of prophets and prophecies, he should invite us and let us tell him about our work. Why invite people like SDA, Methodist, adherents who do not believe in prophecies?” asked.

He likened refusing to relay God’s message to that of Biblical Jonah who refused God’s orders and was swallowed by a whale.

Bempah stated: “if God speaks to Owusu Bempah and I refuse and a whale swallows me, a spiritual whale to swallow me and not vomit me, what do I do?

“My Brother, do your work and allow me to do my work. If you don’t believe my prophecies, it doesn’t mean others should also reject same”.

“I will prophesy what God is saying. Some Christians do not believe in prophecies, that is part of freedom of worship, if you do not believe them, others do,” Bempah clarified.

Below are the lists of Apostle Isaac Owusu-Bempah’s coded prophecies:

Leader of the Glorious Word Power Ministries International Apostle Dr. Isaac Owusu Bempah, pleaded his congregation to accept a proverbial/scenario edition of prophecies during the 2021 Watch Night Church Service at Headquarters in Odorkor-Accra.

Whiles admitting that this year’s session may not have been enjoyable as previous years due to the manner of prophecies, he tasked them to accept it as such and pray about the issues to the best of their abilities.

“God bless you for waiting. In due time, God will allow us to speak clearly on issues. Today is for wise and proverbial sayings, so let’s take it like that.

“As a man of God and as revealed to me by God, I have to do my master’s bidding. All I told you proverbially pray about it as you understand it and let’s pray for divine intervention,” he added.

He also reacted publicly for the first time to a Ghana Police Service directive of December 27, 2021, with respect to New Year prophecies that had the tendency of creating fear and panic.

According to him, there is nowhere that prophecies have triggered an economic crisis advocating that persons who do not believe in prophecies were better off staying away from the contents of same.

African Editors lists a number of the proverbial prophecies that Apostle Isaac Owusu-Bempah delivered during the well-attended service that ended in the early hours of January 1, 2022:

Apostle Owusu-Bempah requested prayers for MPs because two persons holding candlesticks clashed causing their flames to be extinguished. “We need to remember Parliament in prayers, we will remember them in prayers,” he stated.

Without giving specifics or mentioning in which region, the prophet said two tribes with serious disagreements were revealed to him and the spat became a public issue and military intervention was required.” The offshoot was not palatable so we need to pray about it,” he added.

“I saw darkness over Asanteman, I will pray that God intervenes,” he stated.

Prayer for people living along the coast

“We will pray for people living along the coast. I saw a man who was in the shape of water and he had walked to places inhabited by people. When he was going back, he went along with some people from the living world.

“We will pray water does not invade people,” he added.

A religious leader who travelled and never returned

“I saw a religious leader travelling, when he went he stayed on and delayed for so long and I saw nothing more about him. Prayers must go on,” he stated.

4) A popular musician to get into trouble

Apostle Owusu-Bempah announced that big musicians must be remembered especially the very prominent and popular ones.

“I saw a popular musician who is well respected and largely followed, lose his hair and I saw his bare head. He lost all his hair. We will pray for prominent musicians,” he added.

“I also saw a kangaroo wearing military attire and another in police attire fighting and all trees around were in commotion. Trees were trying to intervene but it was impossible, even after a leader tried to intervene and it came down a bit.

“(Let us pray) if not, Kangaroo in military and police attire will clash,” he stated.

Apostle Owusu-Bempah said he saw a sleigh with horses in lead. The eyes of the horses lights like car headlights. “I saw donkeys, horses and sleighs going at speed. The street before them rose and they entered a ditch. What emerged was bad.”

“I saw darkness walking and I asked where it was going and it discarded me. It refused to answer me, ‘darkness stop, what are you doing,’ it refused to respond.

“I saw darkness go and stand at a big house and cover it with its hands, whiles rising, I heard shouts and screams in the house all subsequent questions, it refused and left the land of the living. I didn’t see it again.”

In his closing remarks, he stated: “2022, if you walk well with God, you will be blessed. There will be marriage, which means the end time is almost here. The Bible says women will be given in marriage. Take good care of yourselves.”

8) The roots of biggest tree has rotten in Nigeria