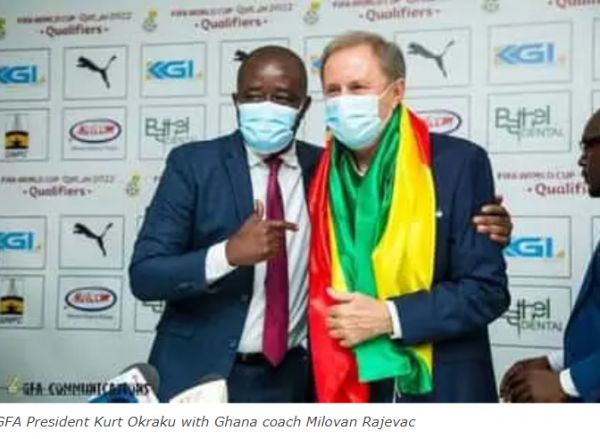 Ghana Football Association (GFA) President Kurt Okraku has subtly jabbed persons who seems to be criticizing the Black Stars for focusing too much on money rather than football, by saying this squad never discussed money prior to the tournament.

He has also mounted defence for the Head Coach of Black Stars Milovan Rajevac after disgruntled Ghanaians called on book runnners of the GFA to show him the exit due to poor showing at AfCON 2021.

The Black Stars were embarrassingly booted out of the 33rd edition of the African Cup of Nations( AFCON) without a win.

It is the first time Ghana has been to AFCON without a single win, and this has generated uproar among the football-loving fans in and outside Ghana.

Some have accused the Black Stars players for focusing on money rather than putting their all for the nation.

The GFA President in an interview with Asempa FM’s morning show, brushed aside those claims and rather praised the player for the commitment to win cup for the nation. He also added that this group of players never prioritized money.

“I have never worked with a group of dedicated Black Stars like I had in Qatar and in Cameroon. All the players coach Milo selected gave their maximum, they went there to win. They were very dedicated, what happened had happened, but the truth must be told, they were a group of dedicated players who never speak about money, who never discussed money”

Meanwhile, Ghanaians are asking for the Head of the Black Stars Coach over what they described as a disgraceful tournament.