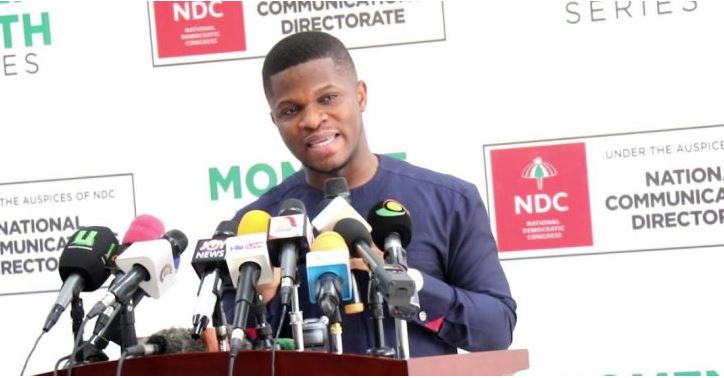 National Democratic Congress (NDC) has referred to as callous the government’s decision to scrap the benchmark values on imported goods into Ghana.

Speaking at a press conference addressed by the National Communication Officer for the party, Lawyer Sammy Gyamfi insists that the decision by Akufo-Addo-Bawumia regime was to create a picture of Ghana’s economy as a sound one.

According to him, the decision by the government would rather negatively affect all Ghanaians irrespective of their political affiliation and would also compound hardship in the system.

“Don’t be deceived that the policy they have introduced is to support AGI and local manufacturers, it is not true the reason for the introduction of this draconian policy is revenue and nothing more. The government is ‘broke’ they have wasted all the money accrued to them and now they want to collect more from us even though they know that times are tough.

“We in the NDC are left in no doubt whatsoever that this latest decision by this government to reduce benchmark value on imported goods further accentuate Dr. Bawumia as the most deceitful political actor in Ghana’s history,” he alleged.

Ghana Revenue Authority, (GRA) on Sunday, January 2, 2022, in a statement announced the implementation of the reversal of the Benchmark Value and will kick start on January 4, after the government’s announcement in the 2022 budget statement.

The Ranking Member on Finance in Parliament and Former Deputy Minister of Finance Dr. Cassiel Ato Forson, has predicted that Ghanaians will experience ‘Economic Misery and inflation’ this year as result of the reversal of the Benchmark Value.

He is therefore entreating Ghanaians to brace-up for more economic hardship.

In a Facebook post, the former Deputy Finance Minister said prices of goods will be increased by at least 30%.

“Unfortunately, the Akufo-Addo/Bawumia Government has reversed the discount on all items using Benchmark values effective today.

“Please Expect Prices of Goods such as Rice, Sugar, pharmaceuticals, cement, roofing sheets to go up by at least 30% effective today,” he disclosed.

For Dr. Ato Forson, “Ghanaians must brace-up for more hardships in new year.

In this article:Benchmark,NDC,value scrap callous-