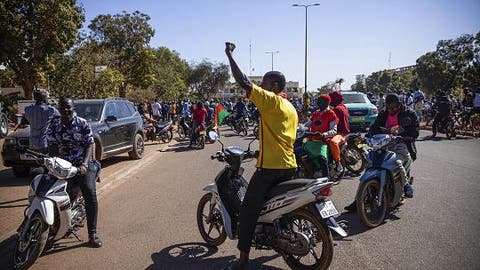 On Monday, anti-Kaboré protesters assembled in Burkina Faso capital’s Ouagadougou. They rallied in support of the country’s mutinous troops who have arrested and detained President Kabore.

If the situation remained confused and tense in Burkina Faso one day after soldiers at several army bases rebelled, protesters gathered in Ouagadougou in support of the country’s mutinous troops. Marching with flags and chanting, people cheered in favour of the soldiers who arrested President Roch Marc Christian Kabore on Monday, January 24 and detained him in army barracks a day after staging an uprising.

“President Kabore, the Head of parliament and the ministers are effectively in the hands of the soldiers” at the Sangoule Lamizana barracks in the capital Ouagadougou, a security source said, with another source confirming the arrest. Soldiers at several army bases across the West African country rebelled on Sunday, demanding the sacking of the military top brass and more resources to fight a bloody jihadist insurgency. Later in the day gunshots were heard near Kabore’s private residence in the capital Ouagadougou, and witnesses reported seeing a helicopter above it.

On Monday, hooded troops were posted in front of the national broadcaster RTB, as the population awaited official reports. Some protesters were seen setting up makeshift roadblocks on several main streets before being dispersed by police.

The latest turbulence coincides with a jihadist insurgency that swept in from Mali in 2015, overwhelming Burkina’s poorly trained and badly equipped armed forces. Despite changes in the military top brass a growing insecurity threatened civilians. Several protests took place last year as demonstrators criticized the failure of President Kabore to quell jihadist violence. The latest of which was prohibited on Thursday.