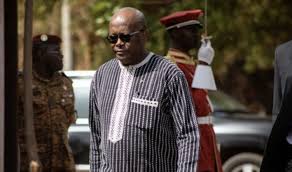 Is a coup d’état underway in Burkina? Contradictory information is circulating after the mutinies that have agitated several camps and barracks in the country on Sunday 23 January. The situation of President Roch Marc Christian Kaboré is uncertain.

President Roch Marc Christian Kaboré, who has been in power since 2015, is in the hands of the military coup plotters, sources have told Jeune Afrique. He is currently in the camp of General Baba Sy, located in the capital, near the Ouaga 2000 interchange, and is still surrounded by elements of his bodyguard.

According to our information, Allassane Bala Sakandé, the president of the National Assembly, has also been arrested. He is the leader of the presidential party Mouvement pour le peuple et le progrès (MPP) and was considered to be Kaboré’s runner-up for the 2025 presidential elections.

The residence of President Roch Marc Christian Kaboré was the target of gunfire on Sunday night. According to a generally well-informed source, “there was fighting”, “the mutineers machine-gunned the presidential guard” and “there are victims”. The source fears that the president has been injured.

These events took place at around 9.30pm local time, as two armoured vehicles were trying to leave the area. One of the vehicles, usually used by the President’s security detail, was abandoned after being damaged in the violence. Traces of blood are visible inside the vehicle. Since then, the fate of the President of Faso has been uncertain.

According to several sources, Roch Marc Christian Kaboré, in power since 2015, was arrested. But others have since denied this version, and put forward another scenario that is gradually becoming clearer. After the shooting at his residence, the president was exfiltrated by his bodyguard, composed of gendarmes, and is now under their protection in a secret location. Discussions with the mutineers are said to be underway.

Last night, negotiations were attempted between the government and the mutineers at the home of the Mogho Naba, a powerful traditional Mossi authority, and Cardinal Philippe Ouédraogo, but they failed. “The negotiations did not succeed and the soldiers decided to settle the matter militarily,” said a military source.

According to several sources, the Burkinabe head of state was arrested on Sunday night.

The circumstances are however unclear since those close to him said yesterday, while mutinies shook several military camps and barracks in the country, that Roch Marc Christian Kaboré was under the protection of the gendarmerie. He would now be in the Karpala camp in Ouagadougou.

In the early hours of Monday 24 January, gunfire was again heard in the capital, particularly in the Patte d’Oie district, where the residence of the head of state is located.

Hooded soldiers took up positions in front of the headquarters of the national television.

Contacted by telephone, a member of the close entourage of the Burkinabe president said that the Prime Minister, Lassina Zerbo, and several members of the government were also arrested, but he did not specify their place of detention.

Sunday eruptions
Mutinies or an attempted putsch? On Sunday 23, the Burkina authorities quickly wanted to show that the situation was under control. At 8 am, the government published a communiqué calling on the population “to remain calm”.

It recognised “the shooting in some barracks”, but denied “the information conveyed on social networks to make people believe in a takeover by the army”.

An hour later, while heavy gunfire was still resounding at Camp Sangoulé Lamizana, which houses the Armed Forces Detention and Correction Centre (Maca), it was the turn of General Barthélémy Simporé, the Minister of Defence, to speak on national television, which had switched to special edition for the occasion.

“No institution of the Republic has been worried for the moment,” he said, adding that the movements observed “in some barracks” were “localised, circumscribed”, and that he was “in the process of getting in touch with those who are at work to understand the motives”.

Camp Lemizana attack
According to a senior source, the movement at Camp Lamizana was led by ten to twenty soldiers, led by an officer. According to this source, the leaders in the other barracks were from the same batch.

As the shooting became more and more sporadic, by mid-day, the theory of mutiny seemed to gain momentum. According to corroborating sources, the rebellious soldiers were essentially demanding from their superiors additional manpower and resources in the fight against jihadist groups, as well as the resignation of several high-ranking officers or security officials.

However, there was no question of the departure of President Roch Marc Christian Kaboré, who has been criticised in recent weeks for his management of the security crisis that is plaguing the country.

In a “safe place” all day, according to one of his relatives, the head of state was content with a tweet in the early afternoon to … encourage the Stallions, who played the same evening their round of 16 of the African Cup of Nations (CAN) in Cameroon. At the same time, demonstrators attacked the headquarters of his party, the People’s Movement for Progress (MPP), which was partially burnt and vandalised.

For several of the president’s loyalists, the possibility that some wanted to attempt a coup de force on Sunday should not be totally ruled out. “What questions us is the coordinated aspect of these mutinies in several barracks in the country and their coincidence with the banned demonstration yesterday in Ouagadougou,” said a senior official.

Since the attack on Inata on 14 November, which left 53 people dead and aroused anger and incomprehension in the army, rumours of a putsch have been stirring the country. These concerns have taken on greater substance since the arrest on 10 January of Lieutenant-Colonel Zoungrana, suspected of having wanted to foment a coup and a dozen other soldiers.

More details as they emerge…