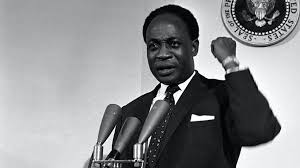 CELEBRATION OF THE ONE HUNDRED AND THIRTEENTH BIRTHDAY OF OSAGYEFO DR. KWAME NKRUMAH.

Fueling The Spirit of Selfless Dedication and Community Contributions.

As part of series of activities planned to mark this special occasion of the leader of Ghana’s independence struggle and all Pan-Africanists – Osagyefo Dr. Kwame Nkrumah, The  Chairperson and Leader of the Convention People’s Party will be joined by all members and sympathizers, to observe the laying of flowers, pouring of libation by the Wolomo, prayers by Christians and Moslem at the graveside of our father, Osagefo Dr Kwame Nkrumah in celebration of his legacy.

The reasons for converging at the Mausoleum is to ignite Osagefo Dr Kwame Nkrumah spirit in all of us, rekindle that Spirit of Giving of oneself for his community and nation, to redress the historical dispositions with facts about DR Kwame Nkrumah, elaborate the objective contributions of the Convention People’s Party and to state the undeniable roles played the selfless founding fathers of CPP as expressing our displeasure in attempt to dilute the legacy of Osagefo Dr Kwame Nkrumah.

There will be a Massive Membership Registration Exercise of Ghanaians under the Operation Take 0ver (*920*277#), sharing of Red Cockerel Stickers and distribution of Food Items (DAY OF GIVING ) to about 2000 Needy Ghanaian families within Accra to re-energize the spirit of giving, selfless dedication and community contributions under a walking exercise of awareness creation from Mausoleum to James Town.

We urge all Ghanaians to come in their numbers to get registered and make CPP the alternative vehicle that will push Ghana’s Development Agenda.

Give something to someone, come with a gift.

The vision of Dr. Kwame Nkrumah was meant to enhance the state of the African by working to elevate his economic status. For it is through economic empowerment that peoples of all races, religion, sex and creed shall be truly free.

Osagyefo Dr. Kwame Nkrumah, born 21 September 1909 – 27 April 1972) was a Ghanaian politician, political theorist, and revolutionary. He was the first Prime Minister and President of Ghana, having led the Gold Coast to independence from Britain in 1957. An influential advocate of Pan-Africanism, Nkrumah was a founding Member of the Organization of African Unity and winner of the Lenin Peace Prize from the Soviet Union in 1962.

After twelve years abroad pursuing higher education, developing his political philosophy, and organizing with other diasporic pan-Africanists, Nkrumah returned to the Gold Coast to begin his political career as an advocate of national independence. He formed the Convention People’s Party, which achieved rapid success through its unprecedented appeal to the common voter. He became Prime Minister in 1952 and retained the position when Ghana declared independence from Britain in 1957. In 1960, Ghanaians approved a new constitution and elected Nkrumah President.

His administration was primarily socialist as well as nationalist. It funded national industrial and energy projects, developed a strong national education system and promoted a pan-Africanist culture. Under Nkrumah, Ghana played a leading role in African international relations during the decolonization period.[8]

Nkrumah led an authoritarian regime in Ghana, as he repressed political opposition and conducted elections that were not free and fair. In 1964, a constitutional amendment made Ghana a one-party state, with Nkrumah as president for life of both the nation and its party. Nkrumah was deposed in 1966 by the National Liberation Council, under whose supervision international financial institutions privatized many of the country’s state corporations. Nkrumah lived the rest of his life in Guinea, where he was named honourary co-president.