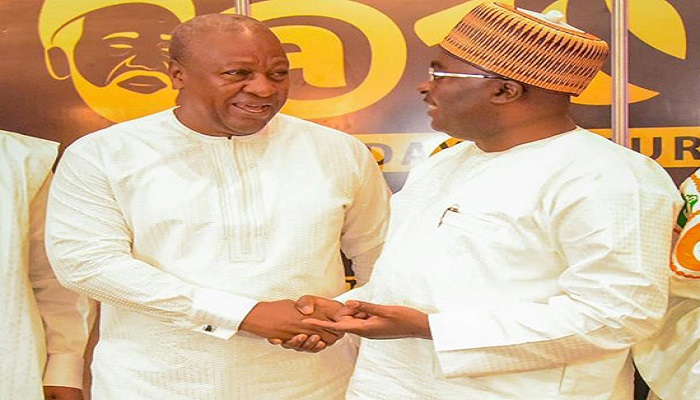 Ex-Presiden John Dramani Mahama has taken a swipe at Akufo-Addo-Bawumia-led Administration, accusing them of returning Ghana to the most worsening economic hardship in 30 years after utopian and unmeritorious promises trumpted in both 2016 and 2020 to the Ghanaian populace to transform the national economy for the better within the first 18 months by NPP regime.

According to Ex-President Mahama, the current state of the Ghana’s economy has never been witnessed in the history of the country.

Speaking at the launch of the TEIN APP today, Monday, 21 March 2022, at the University for Professional Studies Accra (UPSA), the former Ghanaian Leader John Mahama stated that “Daily price increases, fuel price adjustments and nose-diving currency has rather arrested the person who said he had arrested it”.

“The dollar has rather arrested him. So, we are looking for him, we can’t find him. We will ask the IGP if he has the key so that we could find where our Vice-President was”.

The former President also said: “We are gathered at the time when our country is facing economic and social hardship”.

“The Akufo-Addo led government that came to power on the back of mouth-watering promises to make life better for Ghanaians and ensure rapid development of our country has so badly mismanaged the economy. We have been plunged into the most debilitating economic crisis in about four decades.”

He added: “Indeed, we all recollect those mouth-watering promises including one by the current President to transform this country, Ghana within 18 months…”

Meanwhile, Information Minister Kojo Oppong Nkrumah has announced that Cabinet has concluded its deliberations on ways to revive the economy and President Nana Akufo-Addo has taken some decisions aimed at mitigating the impact of the global economic difficulties on Ghana.

To this end, he said: “Finance Minister Ken Ofori-Atta will provide details of these measures later this week after consultations with key social and economic stakeholders”.

“In addition to the scheduled appraisal of the performance of governmentGovernment programmes, Cabinet also extensively discussed the impact of global economic difficulties on Ghana and the Ghanaian people”, a statement from Mr Nkrumah noted.

It added that President Nana Akufo-Addo approved “far-reaching” measures aimed at “mitigating the depreciation of the cedi, ensuring expenditure discipline and providing relief in the face of global fuel price hikes and inflation; as well as ensuring that priority programmes meant to grow the economy are protected”.

The statement said the “government appreciates the efforts of all who contributed to a successful retreat and looks forward to the support of all Ghanaians in implementing the agreed measures”.