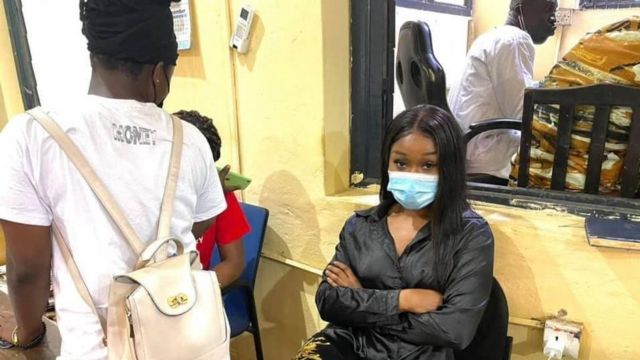 Social media sensation and a convener for #FixTheCountry campaign, Efia Odo, has been arrested by the Ghana Police Service along with other campaigners.

Reports gathered by African Editors indicate that the celebrity was picked up with fourteen other members of the #FixTheCountry brigade.

Efia Odo and her colleagues were arrested after they stormed the premises of the Accra High Court, Friday, in anticipation of the court’s ruling on the case involving the campaigners and the Ghana Police Service.

A post by a member of the campaigners’ legal team, Oliver Barker-Vormawor, on Facebook reveals they were arrested whiles waiting for the court’s verdict.

“Efya Odo and 14 FixTheCountry supporters, including my Kid brother, have been arrested by the Ghana Police Service. They were waiting for the Ruling of the Court at 1:30pm. #FixTheCountry,” he posted on Facebook.

The reasons behind their arrest are unknown.

On Wednesday, the actress, through her Twitter handle, asked supporters to throng the Accra High Court for the ruling.

“I urge you guys to be in the courtroom on Friday to hopefully get a final verdict on #FixTheCountry demonstration. Most of y’all are tired of talking about it on Twitter and are ready to embark on the streets but your attendance speaks volumes. Friday 10:30 am, Accra High Court,” she posted on social media.

The Office of Attorney General has been granted leave to represent the Ghana Police Service in the ongoing suit against the #FixTheCountry Campaign.

The court has ruled that the Office of Attorney General can go ahead and represent the police service in the case by the police seeking to stop the group from holding a street protest.

The group in the ongoing suit raised objection against the Attorney General, Godfred Yeboah Dame who in a previous sitting had turned up in court on behalf of the Republic.

Arguing out their challenge against the Attorney General, the #FixTheCountry campaigners said only a police officer under the Public Order Act can request a court to restrain protestors from taking to the streets.

The group has in the past weeks been demanding better living conditions through social media protests and have been challenged in their decision to take the protest onto the streets.

The Police on their part are seeking to stop the group from embarking on the street protest by citing public health concerns and the imposition of COVID-19 restrictions as its basis.

In his argument, one of the lawyers for the conveners of #FIxTheCountry said the court cannot hear a matter on public order which has been filed in the name of the Republic instead of a police officer as mandated by the constitution.

“The applicant does not have the capacity to bring this application under section 1 subsection 6 of the public order act. Act 491. And as such, the Court is not clothed with jurisdiction to hear or grant the application,” Julius Assinyo said in court.

The Public Order Act section 1(6) which was being relied on by the campaigners to argue their case reads “where the organiser refuses to comply with the request under subsection 4 or fails to notify the police officer in accordance with subsection 5, the police officer may apply to the justice or chairman of the regional tribunal.”

However, in his counterargument, the Attorney General described the application as being “completely misconceived and a misunderstanding of the fundamental laws regarding this application.”