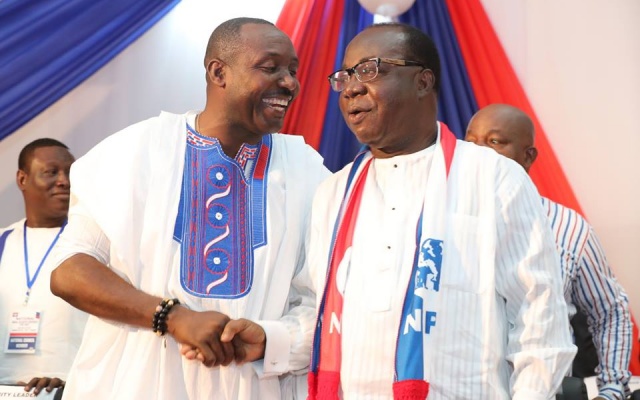 “Allow men to have sex with men; and women with women; I honestly don’t see the hullabaloo; too much hypocrisy”, Chairman of governing New Patriotic Party, Freddie Blay has openly said on Accra-based Asaase Radio, strongly backing homosexuality, insisting opposition against same-sex marriage is a hypocrisy.

According to former Second Deputy Speaker , Ghanaians must allow men who want to have sex with other men and women who desire sex with other women to do so, the national chairman of the governing New Patriotic Party (NPP), Mr Freddie Blay, has said.

“If people want to be gays, it should be their own problem”, Mr Blay told Kwaku Nhyira-Addo onTownhall Talk on Accra-based Asaase Radio on Friday, 17 June 2022, adding: “I won’t go ahead to be a persecutor of those who want to be together as man and man or woman and woman”.

“I think there’s too much hypocrisy about it”, the former Ellembelle Member of Parliament shockingly disclosed.

In Freddie Blay’s view, “emotions have been excited over it to the extent that we are not sober over it”.

“I honestly do not see the hullabaloo about it”, he noted.

“We should allow them [gays] if they want to”, he argued.

“I don’t subscribe to gayism as a choice because I’m not attracted by that but I don’t want to go into people’s bedrooms. I don’t want to see what they are doing,” NPP Chairman Blay noted.

There is currently Proper Human Rights and Ghanaian Family Values Bill in Ghana’s Parliament referred to as anti-LGBTQ+ Bill sponsored by some opposition MPs. The Bill if passed into law, will criminalise homosexuality- gayism, lesbianism, advocacy and promotion of the acts.

A few days ago, angry residents of Tamale in the Northern Region pulled down a pro-LGBTQ+ bill board mounted for Pride month. This happened after similar billboard mounted at Ayawaso West Wuogon Constituency in Accra was pulled down after sponsor-MPs of the ant-LGBTQ Bill led by Ningo Prampram MP Sam George gave ultimatum to the IGP to demolish it.

Meanwhile, Chairman of Parliamentary Select Committee working on the bill Kwame Anyimadu Antwi and MP for Konongo has been accused by sponsor-MPs of the bill of compromise, alleging the latter unilaterally met homosexual community in his office at blindside of his co-committee members with Advocates for Christ Ghana questioning the rationale behind the delay of passage of the over one-year old bill at committee level solely in the name of further consultation.