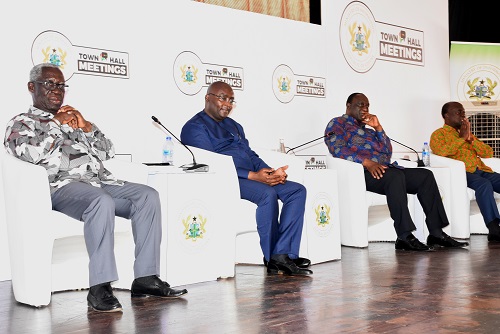 Minority in Parliament has asked President Akufo-Addo to immediately dissolve his Economic Management Team over the wobbling cedi.

Addressing the media, Minority Spokesperson on Mines and Energy, John Jinapor, asked the government to use the windfall from oil export to cushion Ghanaian consumers.

“This government has been a monumental failure. We call on President Akufo-Addo to dissolve the Economic Management Team because they have not lived up to expectation,” Mr. Jinapor told the media on Friday.

He further explained “This morning the exchange rate – the dollar to cedi is trading at 8.5 Ghana cedi. The Ghanaian cedi today is the worst in terms of performance with other major currencies. The price of diesel at the pump is over 40 cedis per gallon. That is the true state of the Ghanaian economy today. Workers, Teachers, drivers, MPs, and market women are really suffering”.

“Indeed you wake up today and you don’t even know how you’re going to make ends meet. And instead of this government sitting up and thinking out of the box, all what we hear is that they do not control world market pricing. The petrol we buy today is on account of the depreciation of the cedi. We control the cedi here. The EMT under Dr. Bawumia has failed woefully, indeed they’ve run out of ideas,” the Ranking Member added.

Mr. Jinapor also called on the government to use part of the reserves from the energy sector levies especially the Price Stabilization Levy to cushion Ghanaians to bring down the escalating oil prices.