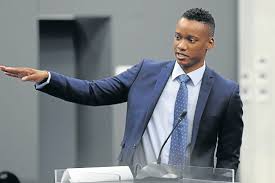 Son of the former President of South Africa Duduzane Zuma has taken a swipe at critiques of anti-government protectors in support of Jacob Zuma currently in prison custody for contempt charges, arguing that the state machinery cannot blame sympathisers who are simply expressing their love for the former South African Leader.

Jacob Zuma was slapped with a 15-month jail term by South Africa’s Constitutional Court over contempt of Court charges and is currently in a prison custody. This has resulted in anti-government  protests amid violent clashes.

In an interview monitored by African Editors on Friday 16 July 2021, Duduzane whose political life has come under scrutiny, took to YouTube and urged protesters to loot responsibly.

“For the people that are armed and are defending themselves, please do so carefully and please do so responsibly,” he said in a YouTube video.

Also, he added,“you cannot blame sympathisers and supporters of my father Jacob Zuma for defending him”.