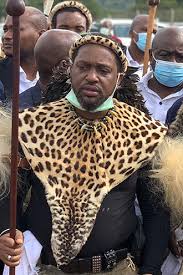 The King of Zulu arguably the prominent ethnic group in South Africa, King Misuzulu Zulu has called for calm, adding that the actions of perpetrators of mass looting and violent protests are shameful.

In a televised program monitored by African Editors on Wednesday 14 July 2021, the Overlord of the Zulu tribe expressed his dissatisfaction with the actions of looters and its impact on the hard won reputation of his forefathers.

“It has brought great shame upon us all, as fingers are pointed at my father’s people,” he said.

stressing on consequences such actions put on the Country, the Zulu Overlord said “But I must appeal to all of us to take a great step back and consider the damage that is being done by our own actions”.

“When food cannot be delivered because trucks and warehouses are being burnt by our people, we will go hungry… vital supply chains have been damaged and it is our very own families that will suffer. My father’s people are committing suicide.”

This comes after the  Former Head of State, Jacob Zuma hands himself to serve a 15 month jail term over what the court calls a contempt of court.

The Constitutional Court in South Africa through Justice Raymond Zondo ordered H.E Zuma to be put behind bars.